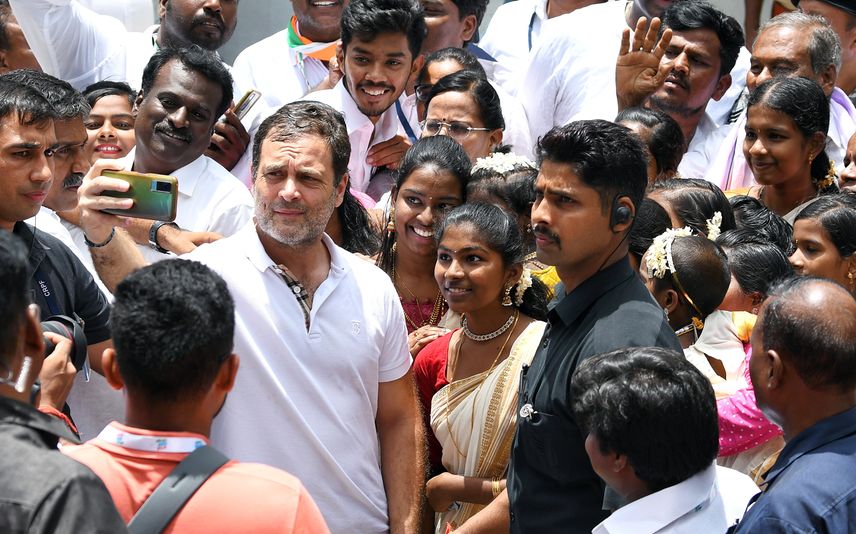 Thiruvananthapuram: Congress leaders on Saturday resumed the fourth day of the party's 'Bharat Jodo Yatra' from Kanyakumari and it is likely to enter Kerala by today evening.

Congress MP Rahul Gandhi along with other party leaders commenced their journey to unite India.

Earlier on Friday while addressing the media persons, Rahul Gandhi said 'Bharat Jodo Yatra' is an attempt to undo the damage done by the BJP and RSS.

The Congress MP from Wayanad also attacked the Bharatiya Janata Party (BJP) for "taking control of all institutions".

"For us, this yatra is to connect with the people. We have taken out this yatra against the damage and hatred that BJP's ideology has caused to this country," he said.

"BJP has taken control of all the institutions of this country and pressurise through them. We are not fighting as a political party anymore. The fight is now between the structure of the Indian state and the opposition," the Congress MP said.

However, taking a pot shot at the Rahul Gandhi-led Bharat Jodo Yatra, Union Minister Anurag Thakur on Friday said that India is already united under the leadership of Prime Minister Narendra Modi.

"Rahul Gandhi is going on Bharat Jodo yatra nowadays. But India is already united under the leadership of PM Modi," Thakur said.

"There is not even a Rs 1 scam allegation on Modi government. The double-engine (BJP) government in both the Centre and State has worked together to take the state and country forward. We can't let the country get divided and must work with unity to take it forward,' he added.

While taking a swipe at Congress' Bharat Jodo Yatra, Union Minister Hardeep Singh Puri advised Congress leaders to refuel their vehicles in the BJP-ruled states so that they can save money.

Puri said during the yatra, Congress leaders can save around Rs 1,050-Rs 2,205 per diesel vehicle while traversing 3,500 kms through 12 states.

In an apparent attack on Rahul and Priyanka Gandhi, BJP chief J P Nadda called the Congress the party of a "brother and sister" and emphasised that his own party was against dynastic culture.

"Congress is a party of brother and sister. These days, Chief Minister Bhagel is going to 'Bharat Jodo' rallies, they need to first align their own party. Our fight is against family politics," said Nadda.

A 3,500-km march from Kanyakumari to Kashmir will be undertaken by Rahul Gandhi which will be completed in 150 days and cover as many as 12 states.

After reaching Kerala on September 11, the Yatra will traverse through the state for the next 18 days, reaching Karnataka on September 30. It will be in Karnataka for 21 days before moving north. The Padyatra (march) will cover a distance of 25 km every day.

The Congress 'Bharat Jodo Yatra' is being held to combat the divisive politics of the BJP-led Centre, and to awaken the people of the country to the dangers of economic inequalities, social polarisation and political centralisation.

The Yatra will include Padayatras, rallies, and public meetings which will be attended by the senior Congress leaders including Sonia Gandhi and Priyanka Gandhi Vadra.

Notably, all the party MPs, leaders and workers along with Rahul Gandhi are staying. Sleeping beds, toilets and AC are also installed in some of the containers. During the journey, the temperature and environment will differ in many areas. The arrangements have been made keeping in view the intense heat and humidity with the change of places.

The Congress suffered a debacle in the assembly polls held earlier this year and the Yatra is seen as an attempt to rally the party rank and file for the upcoming electoral battles.

One drowned, three missing as ‘Palliyodam’ capsizes in Achankovil river