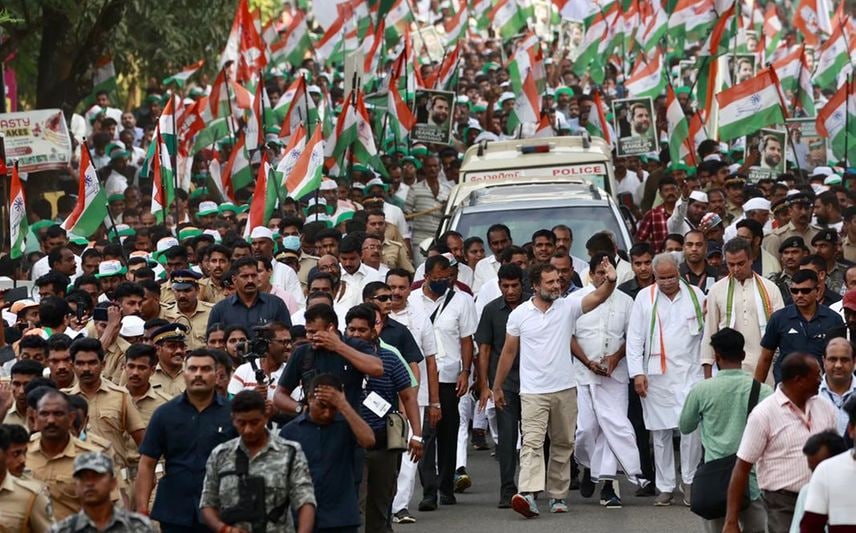 Malappuram/Wayanad: On the penultimate day of the Kerala leg of the Congress party's 'Bharat Jodo Yatra,' Rahul Gandhi on Wednesday remembered late senior party leader Aryadan Mohammed, who died few days ago, and said he was sad that the latter was not with them anymore.

Gandhi, also the MP from Wayanad, said that he misses Aryadan Mohammed as he was a "secular and generous leader" who "worked tirelessly for his constituency and the state.

"He did, whatever he did, extremely well," the Congress leader said and conveyed his condolences as well as his love and affection to the late senior leader's family and friends.

Addressing a large crowd in Wayanad, at the end of the day's yatra, Gandhi said he was "happy to end the Kerala leg of the yatra from my second home" -- his constituency.

"Tomorrow morning, the yatra will leave Kerala, entering Gudalur in Tamil Nadu and then onwards to Karnataka. In Kerala alone, the Yatra will have covered 440 km over 7 districts, with Yatris walking 20-25 kms every day - and most importantly - meeting, interacting, and conveying the message of Bharat Jodo to lakhs of people every single day," AICC general secretary in-charge communications Jairam Ramesh said earlier in the day.

During the yatra, Gandhi also paid tribute to Shaheed Bhagat Singh on his birth anniversary which was today.

"My humble tributes to the great freedom fighter and fearless son of India, Shaheed Bhagat Singh, on his birth anniversary today," he said in a Facebook post.

When he entered Wayanad during the day, he posted, "Thank you to the people of Wayanad for the heartwarming reception you have extended to the Bharat Jodo Yatra. Being with you all is like being home. #BharatJodoYatra."

Prior to that, when the yatra entered Nilambur in Malappuram, Ramesh tweeted, "#BharatJodoYatra has entered Nilambur. A large number of migrants from UP/Bihar work here. International remittances brings in atleast Rs.1 lakh cr a year into Kerala. Remittances from Kerala to other states are perhaps around Rs30,000 cr. Nilambur showcases the message of the yatra."

The AICC general secretary in-charge communications also gave details of the journey till date, saying that the yatra on its 21st day has covered around 466 kilometers since it began from Kanyakumari in Tamil Nadu on September 7.

He further said, "The reception in Kerala to the Bharat Jodo Yatra has been tremendous. Tens of thousands of people have walked with us, lined the streets to see us, waited patiently to hear our speeches every evening - and occasionally sang songs, danced, and created a festive atmosphere.

"On behalf of the Bharat Jodo Yatra and the Congress Party, we thank the people of Kerala for their warmth, hospitality, and energetic response to the yatra."

The Congress' 3,570 km and 150-day long foot march started from Kanyakumari and will conclude in Jammu and Kashmir.