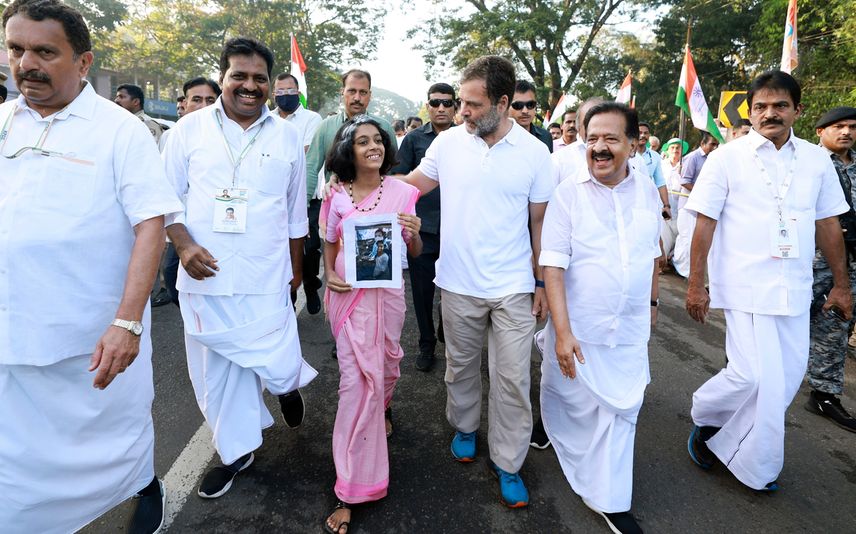 Alappuzha: Senior Congress leader Rahul Gandhi on Tuesday kick-started the 13th day of his Bharat Jodo Yatra from Cherthala here along with thousands of party workers.

The yatra began with the planting of a Rambutan sapling at St. Michael's College. It was organised by Sasthravedi, the environment wing of the Kerala Pradesh Congress Committee.

The morning leg of the yatra will cover a distance of around 14 km and conclude at Kuthiyathodu here.

According to AICC general secretary in-charge communications Jairam Ramesh, the yatra has covered a distance of 255 km in 12 days.

"Today Bharat Yatris will walk 15 kms from Cherthala to Kuthiyathodu in Alappuzha district during the morning session of the padayatra. The campsite tonight is in Kochi district," Ramesh tweeted.

Men, women and children were seen waiting along a highway, one side of which was packed with followers and supporters, to catch a glimpse of Gandhi who stopped every now and then to meet people.

The Congress' Bharat Jodo Yatra will cover a distance of 3,570 km in 150 days. It started from Kanyakumari in Tamil Nadu on September 7 and will conclude in Jammu and Kashmir.

The yatra, which entered Kerala on the evening of September 10, will go through the state covering 450 km, touching seven districts over a period of 19 days before entering Karnataka on October 1. PTI