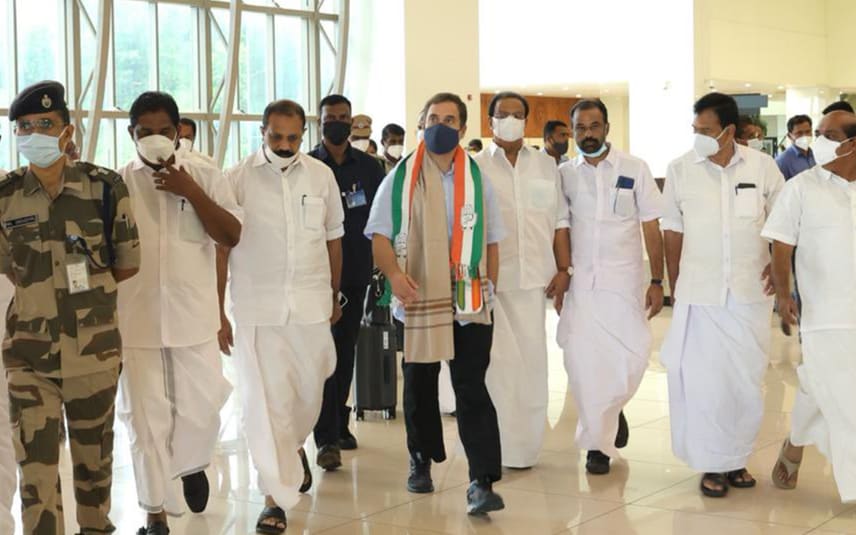 Kannur: Congress leader Rahul Gandhi arrived here on Friday on a three-day visit to his Lok Sabha constituency, Wayanad during which he will attend various programmes, including inauguration of a farmers bank's building and a UDF Bahujana Sangamam.

Massive security arrangements were in place for Gandhi's visit which came amid tension in the state over the alleged attack on AKG Centre, the headquarters of ruling CPI(M), in Thiruvananthapuram. The ruling left party has alleged role of the Congress behind the "bomb attack" on the centre. Congress leaders led by State party chief K Sudhakaran received Gandhi at Kannur international airport as his flight landed there at around 8.30 am.

The Congress MP will reach Mananthavady in Wayanad at 12.15 pm, party sources said.

His visit to the constituency also comes a week after activists of SFI, the students wing of ruling CPI(M), vandalised his office in Kalpetta in Wayanad.

A protest march of the SFI against Gandhi's office at Kalpetta last week alleging his inaction in the issue of Eco-Sensitive Zones around forests had turned violent as a group of activists allegedly entered the Lok Sabha member's office and vandalised it.

The Congress had alleged that the Wayanad MP's office was vandalised with the knowledge of the Chief Minister Pinarayi Vijayan.

Raising the issue in the state assembly on Monday, the Congress-led UDF had disrupted the proceedings forcing the Speaker to adjourn the House for the day.

The CM has said that everyone in CPI(M) from the district level to the state secretariat had condemned the attack and the LDF government also took immediate action as seen from the suspension of the senior officer in-charge of the area as well as arrest of SFI workers, including women.