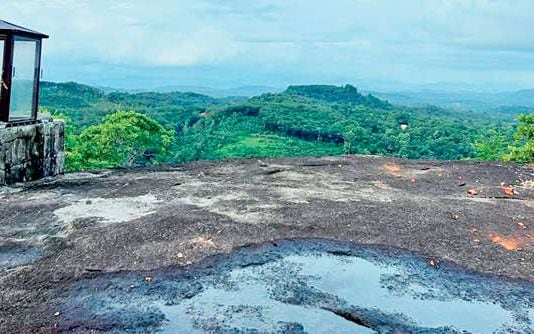 Kollam: Kulappara hill which spreads over 100 acres at Mailam panchayat here will allure nature lovers. The 200-ft tall hill has turned into a favourite spot for tourists. But, now quarry mafia has been striving to get approval for rock mining on the hill.

Earlier, some people approached the authority seeking permission for quarrying of rock. But the plans were not executed due to local protest.The district collector also refused to allow mining activities on the hills after identifying it as a biodiversity zone. Now, a section of people have started to seek permission for quarrying on the hills by hiding the old files.

Some people made a bulk purchase of items and this move has strengthened the suspicion over alleged attempts for quarrying on the hills.

A small temple is also situated atop the hill for the last 30 years. Recently, some natives tried to conduct ‘Devaprasnam’ at the temple. But a group of revenue officials prevented them from alleged encroachment.

Meanwhile, the natives alleged that the revenue officials interrupted the ‘Devaprasnam’ as per the complaint of the quarry mafia. The natives declared that they will not allow quarrying on the hills and will form a protection council for the same.

SFI reconstitutes Wayanad district committee after attack on office of ...