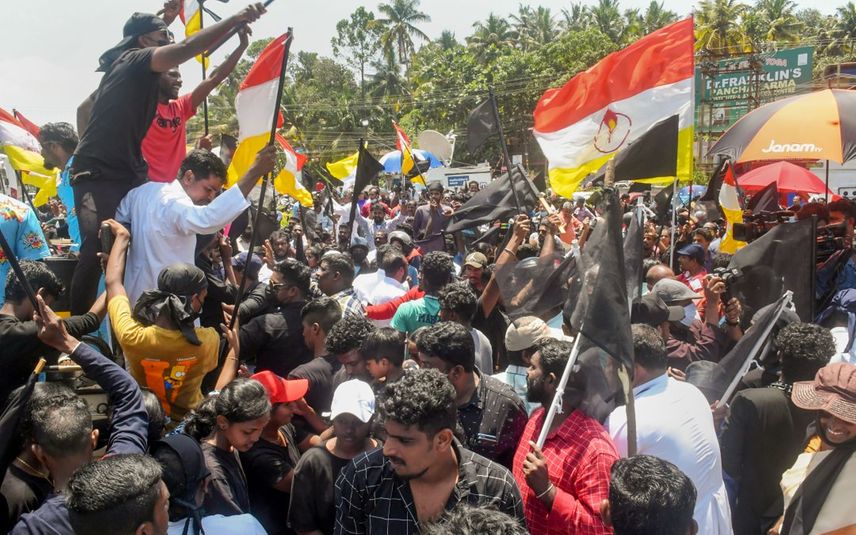 Thiruvananthapuram: Hundreds of fisherfolk hailing from nearby coastal hamlets here continued to lay siege to the main entrance of the under-construction Vizhinjam port for the second consecutive day on Wednesday urging authorities to address their seven-point demands regarding various livelihood issues.

Talking to reporters in New Delhi, state Fisheries Minister V Abdurahiman rejected media reports that construction activities had been halted at the Vizhinjam port due to the protest by the coastal people.

"During the monsoon season, all work in the coastal areas should be stopped. They might have stopped the construction work because of this. The rest of the things should be discussed by them," he said.

He also said it was not possible to stop projects like the one in Vizhinjam all of a sudden.

Led by the priests of the Latin Archdiocese, the coastal community members including women flocked to the entrance of the multi-purpose seaport, located at nearby Mulloor, in large groups since Wednesday morning.

After laying siege to the entrance, they went ahead with their protest sloganeering against the state government and the "unscientific" construction of the port which they alleged as one of the main reasons for the increasing coastal erosion in the southern districts of the state.

To express solidarity with their community members, a large number of fishermen also came from hamlets like Poovar and Puthiya in bike rallies to the protest venue.

Though some protesters could be seen trying to fix a black flag on the barrier raised by the police to block their way, some others even tried to drag down the barricade using a rope.

Addressing the fisherfolk, Latin Archdiocese archbishop Thomas J Netto said the sea is their mother and would not allow any construction activities that destroy its shores.

"Even though the authorities were aware that it would destroy the sea shores, they continued to construct 'pulimuttu' (artificial sea wall) and put granites along the coasts for kilometres as part of the building of the port," he alleged.

Stating that the intensity of the protests would be continued till their demands were met, the bishop also said he would soon shift his stay to the coast, the protest venue, from his official residence in Vellayambalam in the heart of the city.

"Excellent meeting w/ Kerala ChiefMinister @pinarayivijayan on the problems of the coastal community. He was sympathetic & receptive to the suggested solutions: adequate compensation & rehabilitation of those affected in coastal areas, & an expert study of coastal erosion," Tharoor tweeted after the meeting.

Last week, hundreds of fisherfolk had taken out a massive protest rally in the state capital and laid siege to the Secretariat here with boats and fishing nets, alleging that the Left government was neglecting their demands.