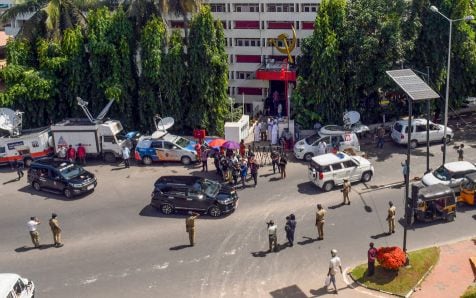 Thiruvananthapuram: Preventive detention of people whenever Kerala Chief Minister Pinarayi Vijayan steps out is a "fascist measure" as even when the Prime Minister is travelling by road no one is taken into custody in advance, the Congress-led UDF opposition alleged on Tuesday while criticising the elaborate security arrangements for Vijayan.

Leader of Opposition (LoP) in the state assembly V D Satheesan said by taking up such "fascist measures", the southern state has been turned into a "banana republic" by the ruling Left front as no other state sees people put into preventive detention when the chief minister leaves his residence.

Recently when Vijayan attended two events in the state capital, 10 people were put in preventive detention, he alleged and claimed that the police was being controlled by the CPI(M) and its district committees.

However, according to the police some of those taken into custody recently were Youth Congress workers who raised black flags against the Chief Minister and attempted to obstruct his movement.

Satheesan also raised the recent controversial issue of LDF MLA and former state minister K T Jaleel having allegedly attempted to shut down the publication of a Malayalam daily by writing a letter to the rulers of UAE against it.

The details of such an alleged attempt were disclosed by Swapna Suresh, a key accused in the gold smuggling through diplomatic bags case, in an affidavit filed in the Kerala High Court as part of her plea to quash the FIR lodged against her on a complaint by Jaleel.

Satheesan said a minister of the previous Vijayan cabinet writing a letter to the ruler of UAE was a breach of protocol and if it was done without the CM's knowledge, then the Chief Minister should inquire about it.

In view of these recent developments, the revelations by Suresh have gained credibility and cannot be seen as mere rantings of an accused as claimed by some, he said.

Therefore, in such a situation, central agencies should conduct further investigation into the revelations by her, but they are not doing so due to some kind of "agreement" between the BJP and CPI(M), Satheesan alleged.

He said that since central agencies are not carrying out further probe into these aspects, UDF will seek legal recourse to ensure there is an investigation.