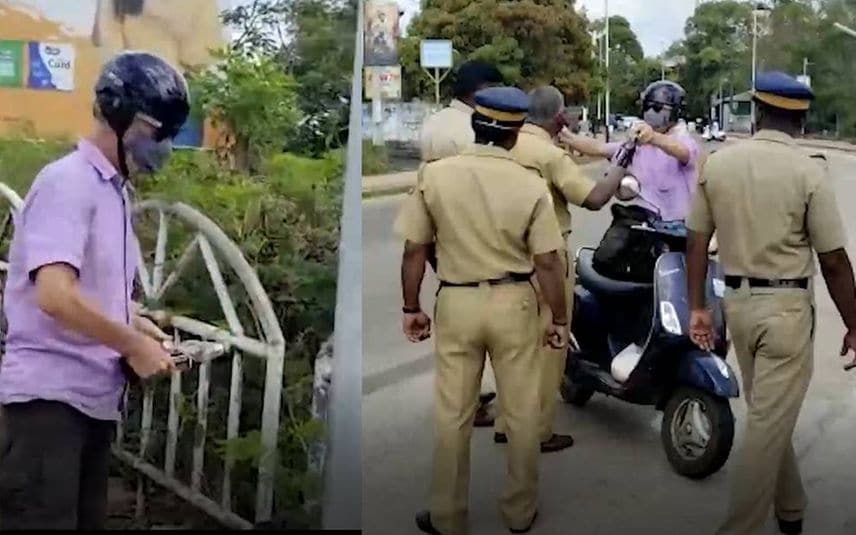 Screengrab of the visuals

Thiruvananthapuram: On the new year eve, a video of an incident fetching flak for cops is making rounds on social media. The video shows interaction of police officials with a foreign tourist staying in Thiruvananthapuram. In the video it can be seen that irked over the conduct of police officials, the foreigner emptied a liquor bottle in his possession to mark his protest.

Reportedly, the incident happened at Kovalam. A foreign tourist named Steve was returning from a Bevco outlet after purchasing liquor bottle for celebrating the new year. On the way, he was stopped by the police and they checked his bag. They saw two liquor bottles and sought purchase bill of the liquor bottles in his possession. However, he replied that he did not carry the bill. Police took a stringent stance that he will not be allowed to possess the bottles without bill.

The incident was captured by some onlookers in their mobile phones. The verbal spat between the police and Steve escalated. Irked over the matter, Steve emptied one of the bottles on the roadside. As the happenings were captured by the onlookers, the police then changed the stance and informed Steve that he does not have to dispose liquor. They said he only has to submit the bill.

To prove his innocence, Steve returned to the outlet, collected the bill and showed it to the police. Also, after emptying the bottle, he did not throw away the plastic bottle. All these acts have given a heroic image to Steve in social media and he is garnering support from netizens.