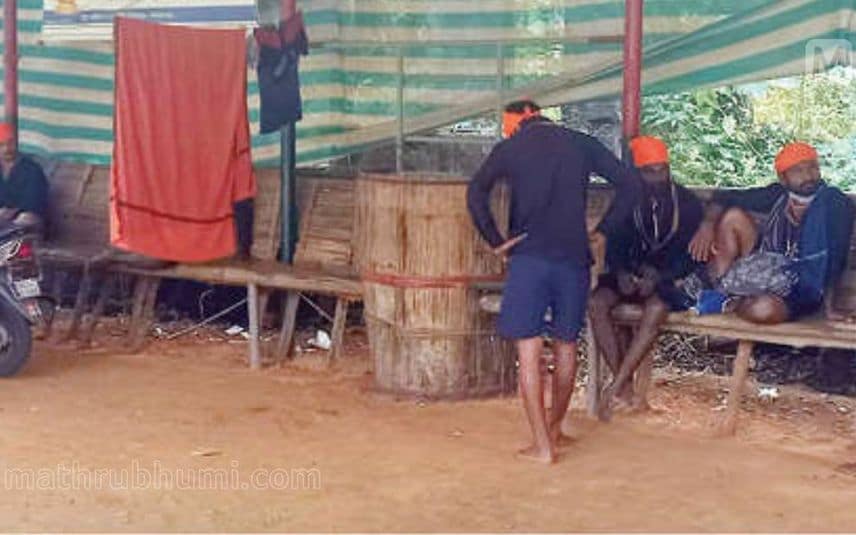 Pilgrims resting at the temporary shelter near Koyikkakkav forest office

Erumeli: Sabarimala pilgrims, who trek to the shrine through Karimala forest path were stopped by the police and forest officials at Koyikkakkav forest range. The officials informed that the path is not suitable for trekking. But the devotees reached from Erumeli to trek via Karimala after seeing the press release of the Devaswom board and the minister's statement that the conventional Karimala route has been opened for the devotees.

14 pilgrims from the states of Andhra Pradesh, Tamil Nadu and Karnataka reached Koyikkakkav on Tuesday morning after travelling six kilometres from Erumeli by foot. They returned after the officers convinced them that the route is dangerous to travel through as it was deserted for the past two years due to the travel ban. However, the pilgrims left after raising their strong discontent over the travel restriction.

The devotees reached Koyikkakkav via the residential regions including Charala, Irumboonnikkara and Perur Thodu. Though the travel ban still exists, the authorities have not placed any notice boards here.

Sabarimala temple opens; 15,000 can have darshan

Sabarimala temple to open on Tuesday for 10-day annual festival

Sabarimala to open on Tuesday, 15,000 devotees allowed per day