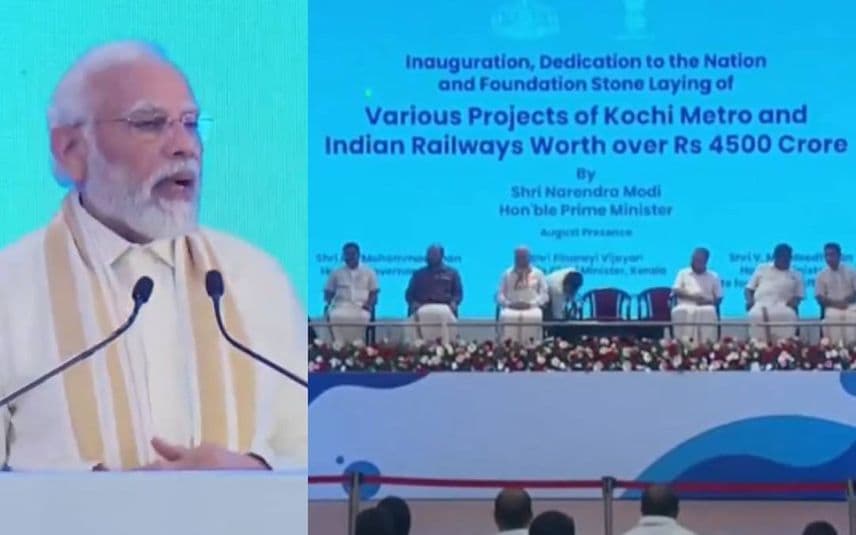 Kochi: Prime Minister Narendra Modi on Thursday inaugurated various projects, including that of the Indian Railways and Kochi Metro, which would improve connectivity in Kerala and said these would help in boosting tourism and commerce in the southern state.

The Prime Minister, who is on a two-day visit to the state, inaugurated, laid the foundation stone of and dedicated to the nation, railway and metro projects in the state worth Rs 4,500 crore.

Modi laid the foundation stone of Kochi Metro Phase- II project, inaugurated its phase-1A stretch from SN Junction to Vadakkekotta and also dedicated to the nation the Indian Railways' newly electrified section between Kollam-Punalur which was completed at a cost of Rs 76 crore.

The proposed phase-II corridor of Kochi Metro Rail Project from JLN stadium metro station to Infopark, Kakkanad, would cover 11.2 km and have 11 stations and with the inauguration of Phase IA, Kochi Metro would cover at least 27 km with 24 stations, an official statement said.

Speaking at the event, which was also attended by Kerala Governor Arif Muhammed Khan and Chief Minister Pinarayi Vijayan, the PM said the connectivity projects worth Rs 4,500 crore would help improve ease of living and ease of doing business in the state.

Modi noted that the phase-II of Kochi Metro would be a boon for the youth and professionals living in the port city.

He also said that a model of multi-modal connectivity, the Unified Metropolitan Transportation Authority, has been set up in Kochi and it will work to integrate all the modes of transport, such as metro, bus, waterway etc.

"With this model of multimodal connectivity, the city of Kochi will have three direct benefits. This will reduce the travel time of the people of the city, reduce the traffic on the roads and reduce the pollution in the city.

"To protect the environment, India has taken the colossal pledge of net zero, it will also help in that. This will reduce the carbon footprint," Modi said.

The Prime Minister further said that in the years before the BJP government at the Centre, only 250 kilometers (kms) of metro network was in place in the entire country.

However, in the last eight years, 500 kms have been added to that and work was going on to add another 1,000 kms to the expanding metro network.

Modi also claimed, in his inaugural speech, that the Centre has invested lakhs of crores of rupees in Kerala that will not only help in infrastructure development, but also increase employment opportunities and boost agriculture and commerce in the state.

His claim comes at a time when the LDF government in Kerala has been alleging that the Centre was trying to hamper development in the state and push it into financial ruin by using the Enforcement Directorate to go after KIIFB and restricting the state's capacity to avail loans from the open market.

Modi said that the Centre was spending Rs 55,000 crore on widening of the National Highway-66 to improve connectivity in the state and the doubling of the railway tracks in the Kuruppanthara-Kottayam-Chingavanam section has led to the entire 634 Km stretch from Thiruvananthapuram to Mangaluru in Karnataka becoming fully doubled.

"It (doubling of the tracks) would lead to faster and seamless connectivity for the travelling public and especially the lakhs of devotees bound for Lord Ayyappa shrine in Sabarimala", he said.

The electrified Kollam-Punalur section will offer a fillip to eco-tourism besides serving as a faster and affordable means of transportation through the picturesque route.

He said that connectivity helps boost tourism and commerce and the central government's commitment to help Kerala in these sectors can be seen from the around Rs 70,000 crore worth loans given under the Mudra scheme to entrepreneurs in the state.

The redevelopment of the three railway stations -- Ernakulam Town, Ernakulam Junction and Kollam Junction -- will ensure that they have airport like facilities, including state-of-the-art amenities, dedicated arrival/ departure corridors, aesthetically designed interiors with facilities for differently-abled passengers, skywalks, spacious parking lots and attractive landscapes, he added.

Pinarayi Vijayan, in his welcome address, expressed gratitude for the help received from the Centre for the Kochi metro project and said it needs the central government's "valuable" assistance to decongest road traffic in the state.

He said that the widening of the NH-66 was progressing at a fast pace and indicated the benefits of Centre-state cooperation.

Vijayan urged the PM to approve the state government's proposal for development of the transport sector in Kerala.