The opposition leader said he has sent a letter to Prime Minister Narendra Modi seeking a CBI investigation into the case. 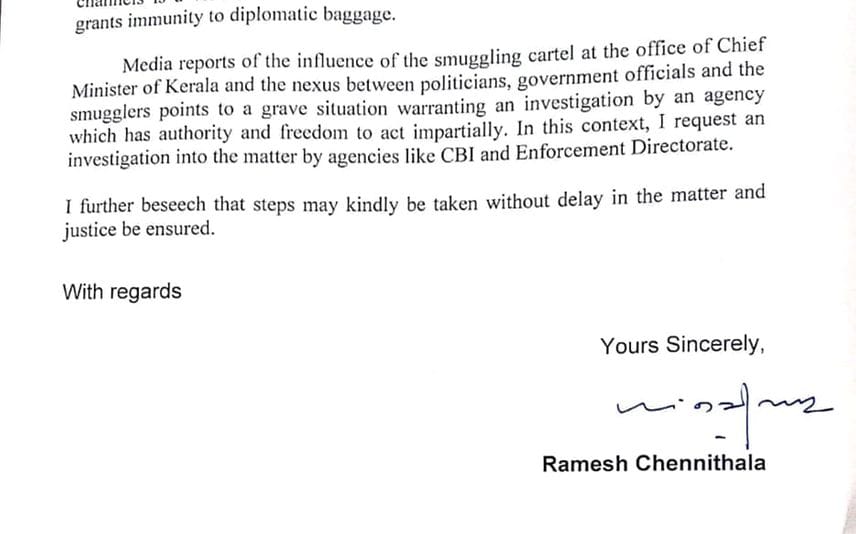 With the customs department tightening the noose on the 30 kg gold smuggling case and the former PRO of the UAE consulate at Thiruvananthapuram, Sarith, under custody, the issue is taking a new turn with the Opposition coming out against the role played by M Sivasankaran.

Addressing a press conference here on Tuesday, Opposition leader and senior Congressman Ramesh Chennithala alleged that the Chief Minister's office is turning into a hub of criminal activities. Each time when the Opposition raised an allegation, the CM tried to safeguard his secretary, he said.

"The Chief Minister's Principal Secretary, A.M. Sivasankaran, is turning into a major point of all the deals taking place in the state, and the gold smuggling case is of much higher proportion and a CBI investigation is necessary for this case," Ramesh Chiennithala said on Monday.

The CM has agreed to all the allegations raised by the opposition. Whenever we (the Opposition) raised an allegation, the CM tries to safeguard his secretary Sivasankaran. We clearly mentioned Sivasankaran’s role in the Sprinklr scam. Then the CM took action to safeguard his secretary. When we raised the irregularities regarding BEVCO App, the CM did the same. Now, at last when the CM is scared that the investigation would lead to him, he is removing Sivasankaran from the secretary post, alleged Ramesh Chennithala.

“The CM did not oppose or remove Sivasankaran in Sprinklr, BEVCO and E-Mobility issues. We have been ministers in the state and whenever the secretary or private secretary is involved in any irregularity, the responsibility is with the minister. If the CM has misused his official position to safeguard the accused in the gold smuggling case, the responsibility will rest on his shoulders,” said the Congress leader. 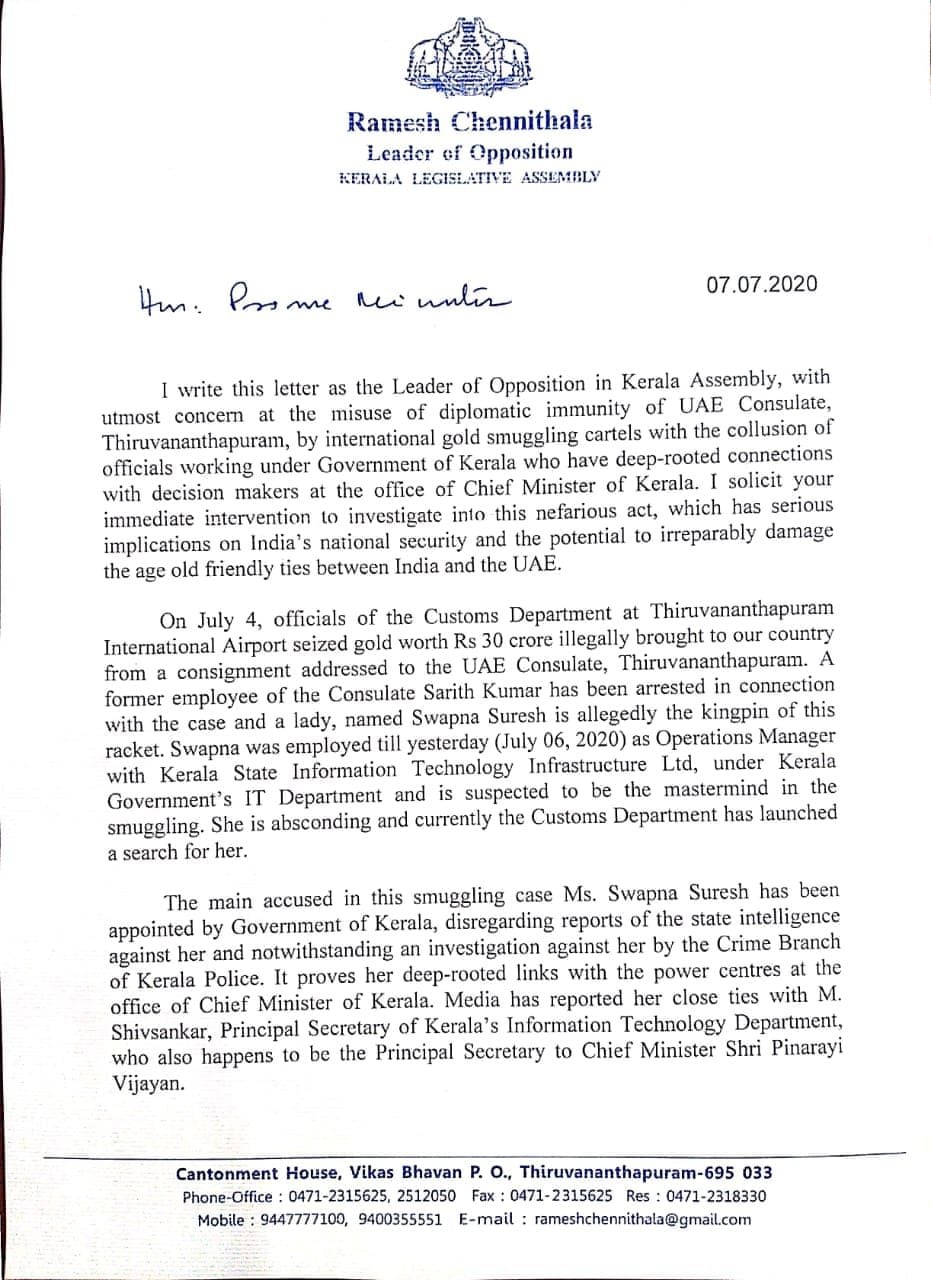 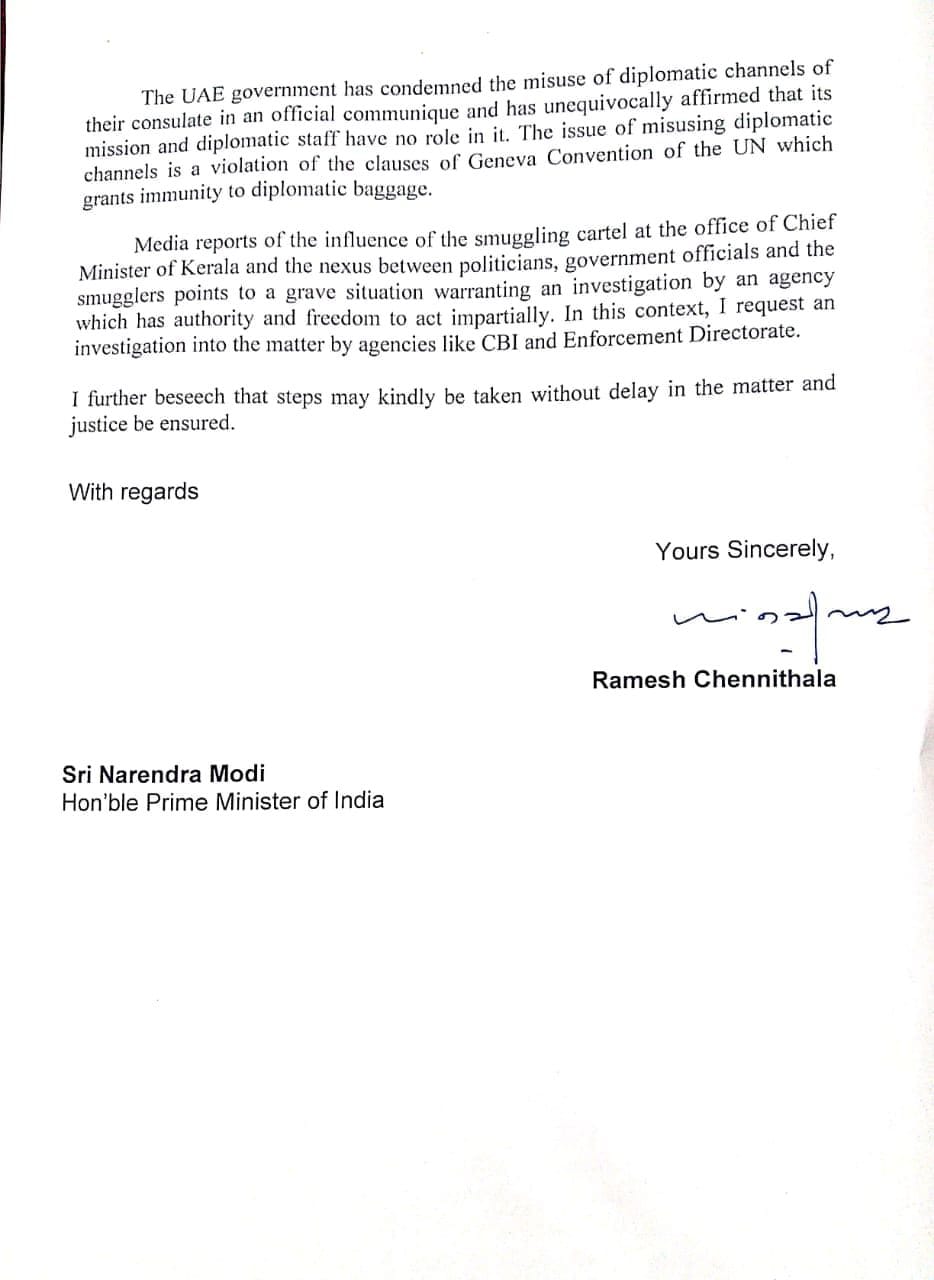 The woman involved in the controversy, Swapna Suresh, is working in the marketing and liaison section of the Kerala IT department, which is directly under the Chief Minister. Even after intelligence reports coming out against her, how is this woman able to get such a job, he added.

Two important persons in the Chief Minister's office are involved and investigating agencies must probe this and it is for the Chief Minister to reveal whether he has any involvement with Swapna Suresh, Ramesh Chennithala said.

“Yesterday, the CM responded to the allegations by stating that some people were trying to blame his office for the crime. The CM ridicules us whenever we raise an allegation against him. There is mystery behind all the actions taken by the CM and his office regarding the gold smuggling case. We will bring out the truth. As the Leader of Opposition, I have written to Prime Minister Narendra Modi seeking a CBI inquiry into the matter,” Ramesh Chennithala said.

Many allegations are being raised over the activities of the CM’s private secretary. How come the CM is unaware of the attack that took place inside the flat? Hiding such serious allegations against the CM’s secretary is a grave mistake, Ramesh Chennithala said.

“Removing the secretary will not put a stop to the case. It is a smuggling case and it has international links. I wrote to the Prime Minister as the CM refused to do so,” he added.