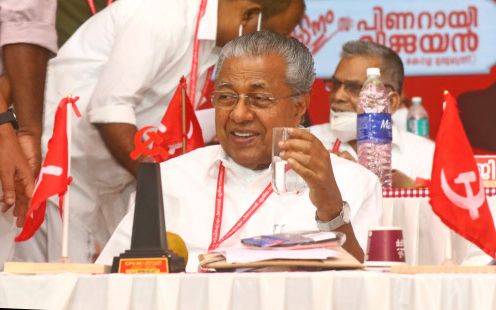 Thiruvananthapuram: Launching a scathing attack on Chief Minister Pinarayi Vijayan, the Kerala BJP unit on Monday described him as a "friend of the Islamic terrorist" who is implementing the agenda of the Popular Front of India (PFI).

State BJP general secretary P Sudhir on Monday said that the PFI activists are forcefully pinning the "Me Babur" badge on the shirts of students of a local school at Kottangal, Pathanamthitta.

"The panchayat, in which the school is located, is ruled jointly by the CPM and the SDPI and hence, the Vijayan government has turned a blind eye to this heinous crime. This is not at all acceptable," said Sudhir.

"State Education Minister V Sivankutty had publicly announced that the names of all those teachers who have not taken the Covid-19 vaccine will be made public, but it is not being done just to appease one community," Sudhir added.

Meanwhile, National Commission for Protection of Child Rights chairman Priyank Kanongoo said that he will seek a report to this effect from the Pathanamthitta district SP.