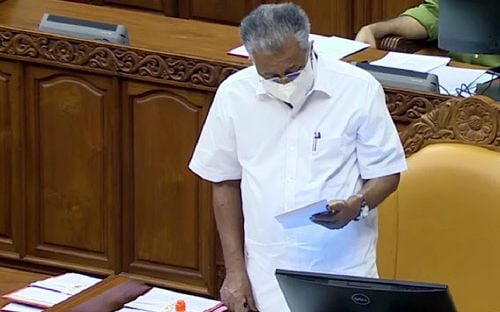 Thiruvananthapuram: Kerala Chief Minister Pinarayi Vijayan on Wednesday said his government has a development perspective that balances economic growth and environmental protection and rejected the opposition UDF's criticism that it was an advocate of mammoth projects that may adversely impact the nature and ecology.

Rubbishing the Congress-led UDF members' charge that his government's disaster management policy was a failure and its unscientific development initiatives was one of the reasons for the natural calamities recurring in the state, he said it has always been taking a stand that ensures the protection of environment.

The proclaimed goal of the Left government is to create a 'nava Kerala' (new Kerala) that is capable of withstanding natural calamities, the Chief Minister told the state Assembly.

He was speaking in response to a notice seeking an adjournment motion moved by P C Vishnunath (Congress) on the matter during the zero hour.

Noting that it was the reason that persuaded the government to issue a white paper on the environment of the state, he said it was already taking each environmental issue with utmost seriousness and taking steps to address them at each state.

Elaborating on various steps being taken by the state government for environmental protection, the Marxist veteran said a high-level committee under the chairmanship of the Additional Chief Secretary (Department of Environment) has been formed to draw up an action plan to make the state carbon neutral in a timely manner.

The first meeting of the panel would be held on November 19, he said.

He also gave a detailed description of various pro-environmental initiatives of the government ranging from ensuring the natural flow of water bodies to remove silt deposited in dams and rivers as part of plans to reduce the impact of natural calamities.

Slamming the opposition for their criticism, the CM also said it was "baseless" and "unscientific" to attribute the natural disasters of 2018 and 2019 that had wrecked havoc in the southern state to any action by the LDF government.

However, opposition leader V D Satheesan alleged that the government had not implemented any recommendations of the expert panels which had studied about the natural floods that had hit the state in recent times.

Attacking the Left government for implementing mammoth projects like K-Rail, which may adversely impact the environment, he also alleged that the state's disaster management authority was the 'greatest disaster'.

Based on the Chief Minister's reply, Speaker M B Rajesh rejected leave for the motion. PTI