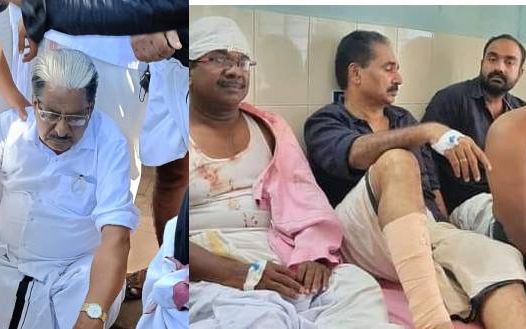 MP N K Premachandran and other injured at the hospital

Kollam: The RSP protest march to the district collectorate in Kollam turned violent as many including MP N K Premachandran were injured in the protests. The police fired tear gas at the protestors twice during the conflict that ensued. As the protests turned more ugly, RSP activists threw eggs at the police.

‘CPM triggered the violence across the state. Peaceful protests are being targeted by the police as per the instructions from the party office. They are trying to shift the attention from the allegations levelled by Swapna in the gold smuggling case,’ said MP Premachandran.

‘This is neither North Korea nor Stalin’s Russia. If Pinarayi’s police expect to drown democratic protests in blood, they should be ready to face a strong backlash,’ said Shibu Baby John.

‘The attempts to mute the voice of the opposition by booking cases and beating up protestors are not suitable for a democratic state. This government cannot pace forward by treating the public as a common enemy,’ Shibu Baby John remarked.