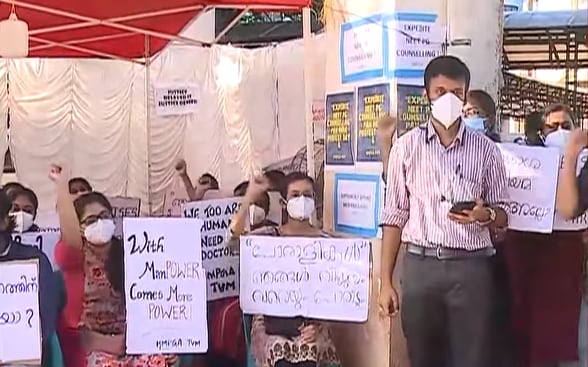 Thiruvananthapuram: With the house surgeons on Monday extending their support to the ongoing protests by the junior residents, the normal functioning of the state-run Medical Colleges were badly affected.

Across the state, the out-patient wings in all the medical colleges were overcrowded and since only senior doctors were on duty, many patients were either left stranded or sent back. According to sources, only emergency surgeries are being conducted, while earlier posted surgeries for Monday have been postponed.

The junior residents have been on a protest for the past four days demanding immediate admissions to the first year Post Graduate course, appointing of non-academic junior residents and hiking the monthly pay. And with the house surgeons also joining the protest, things have gone haywire.

"We have decided to join the strike for a day as we feel their demands are genuine. Today, we have decided to attend to only Covid-related work. We have been called by Health Minister Veena George for a discussion which we will attend. We also have grievances and want our stipend to be restored. Let us see what's the outcome of the talks," said a protesting house surgeon.

Meanwhile, Veena George has been speaking tough against the protest of the junior doctors and has ruled out any talks with them.