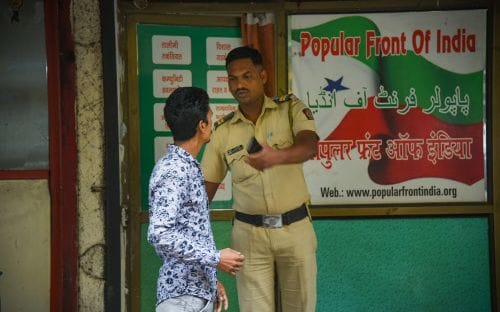 A security person keeps vigil outside the Popular Front of India (PFI) party office in Navi Mumbai, Thursday, Sept. 22, 2022. A multi-agency operation was spearheaded by the National Investigation Agency (NIA) on the PFI in 11 states for allegedly supporting terror activities in the country | Photo: PTI

Thiruvananthapuram: In 2006, leaders of three like-minded outfits from Kerala, Tamil Nadu and Karnataka sat together and discussed the need for forming a pan-India organisation for empowering the Muslim community from their socio, economic and political backwardness.

On the basis of the decision arrived at the meeting held at Manjeri in Kerala's Malappuram district, leaders of the National Development Front (NDF) in Kerala, Manitha Neethi Pasarai in Tamil Nadu and Karnataka Forum for Dignity assembled at Bengaluru few months later and announced the merger of the three outfits, leading to the emergence of the Popular Front of India (PFI).

Sixteen years later, on Thursday, the National Investigation Agency (NIA) and the Enforcement Directorate (ED) swooped down on PFI activists in 11 states and picked many of them up for their alleged terror-related activities following raids, described by officials as the "largest ever" such exercise. The outfit protested the "fascist regime's move to use agencies to silence dissenting voices."

The PFI claims to strive for a neo-social movement ostensibly for the empowerment of marginalised sections of India.It is, however, often accused by law enforcement agencies of promoting radical Islam.

After its birth in 2006, PFI soon expanded its operations in other states in north, west and east and northeastern parts of the country. It further spread its wings after the merger of various social organisations with it.

Several analysts have traced the roots of the PFI to the NDF, a radical Islamic outfit which was formed in 1993, in response to the demolition of the Babri Masjid a year ago.

Founded by former leaders of the banned outfit Students Islamic Movement of India (SIMI), the activities of the NDF were widely discussed in Kerala following communal riots in Kozhikode district in 2002 and 2003 which saw killings of people belonging to two communities.

Although the PFI was formed with an objective to work for the socio-economic advancement of Muslims in the country, the outfit soon came under the radar of various state and central agencies for all the wrong reasons, particularly after the 2010 incident of chopping off the hand of a college professor in Kerala for allegedly hurting religious sentiments through a question paper he had set.

Several activists linked with the PFI were arrested in connection with the 2011 incident that was condemned by all democratic forces in the country.

Rooted in anti-Sangh Parivar ideology, the outfit was blamed for violence during various protests organised by minority communities in the country against the BJP government at the centre particularly during the agitatoins against the Citizenship (Amendment) Act (CAA).

The outfit also came under the scrutiny of various agencies in connection with the alleged "Love Jihad" incidents in Kerala, forced conversion of people belonging to other faiths and disapperance of some people from the state to join the Islamic State in Afghanistan and Syria.

The activists of PFI and its allied organisations were also arrested for killings of RSS-BJP leaders in Kerala in the recent months.

The fund raising activities of the PFI are also being investigated by the central agencies like the ED and Income Tax Department.

The leaders of PFI allegedly travel to the Middle East nations for raising funds for the activities of the organisation as many of their supporters from South India are working in that region. The donations received by the outfit were investigated by the central agencies.

The Kerala government had banned the freedom parades organised by the PFI on Independence Day every year through the selected areas of the southern state.

Despite being blamed for all these reasons, the PFI, however, continued its focus on its mission of upliftment of Muslim community through its Empower India Foundation which has come out with a project document for 2047.

Its leaders have said the idea is to set a vision and prepare a long term action plan for empowering the country and the Muslim community when India celebrates 100 years of its independence.

It had organised several national seminars and city get-together programmes in various states as part of the project preparation.