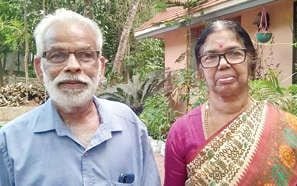 Chethallur (Palakkad): A couple donated 11.5 cents of land to the government's Life Mission project. Aryambavu native Chandrasekhara Pillai and his wife Devaki donated their land under 'Manassodithiri Mannu', a campaign launched by the government.

The couple has donated 11.5 cents of their land near the Aryambavu Nayadipara Anganwadi. The land is well resourced with water, light and accessibility to transport. The couple revealed that they decided to donate the land after learning that there are plenty of homeless people.

Chandrasekhara Pillai and Devaki handed over the consent of giving the land to Minister Govindan at a public meeting held in Shornur on March 21. Kottopadam Grama Panchayat officials visited the land and confirmed that four houses will be constructed there.