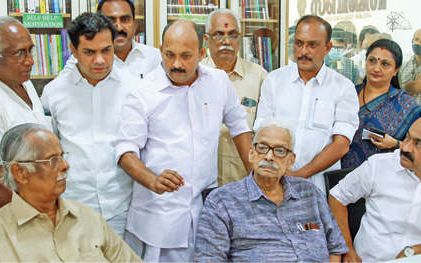 Kochi: Only Congress workers can destroy their party, writer T Padmanabhan said here on Sunday. He was inaugurating the Paul P Mani Memorial Library and Sabarmati Study Centre at the Ernakulam DCC office.

Some leaders are like leeches. A leader, who became the union minister twice and got elected to the Assembly and Parliament several times, was seeking a seat recently. I am not naming him.

Robert Vadra now says he also intends to take up political responsibilities. What will be his role? Rahul Gandhi thought he can keep winning even if he doesn't take care of his constituency. I respect Smriti Irani. Despite losing the election (in 2014), she visited Raebareli regularly and defeated Rahul in 2019. Rahul had to resort to the Wayanad constituency to go back to the Lok Sabha. I am saddened to say all this. Congress shall spread to the rest of the country from Kerala, the writer said.

Only a 93-year-old Congressman like me can say this. I am wearing khadhi since 1943. I still wear it even when I go abroad. I wish to be cremated at Payyambalam draped in the tri-colour.

Opposition leader VD Satheesan said that he has taken the criticism of Padmanabhan wholeheartedly. DCC president Mohammed Shiyas presided over the meeting.