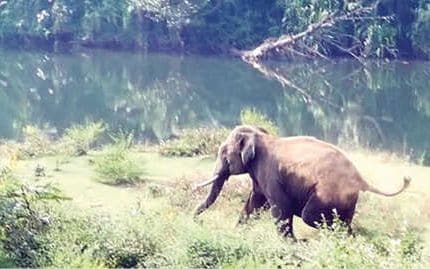 The wild jumbo seen at Ayyanpankavu riverbank adjacent to the bridge

Kannur: Kannur’s Aralam regularly finds place in media reports due to human-wildlife conflict and related protests in the region. Last week, a tribal man was trampled to death by a wild jumbo. Now two wild jumbos have crossed the Aralam Wildlife Sanctuary and are invading the Aralam Farm region.

People plucking grass on the Ayyanpankavu river bank, adjacent to the bridge, happened to see these jumbos. This has alarmed the people of the locality. The locals intimated the forest officials but it is learnt that driving the elephants away is a cumbersome process.

The elephants are prowling in an island-like region and if they have to be chased, then it should be done navigating human settlements. This pose a danger. Forest officials are observing the movement of the jumbos. They expect that the jumbos will retreat on the same path they entered during night. While measures to restrict the entry of other wild jumbos to the farm region are in place.