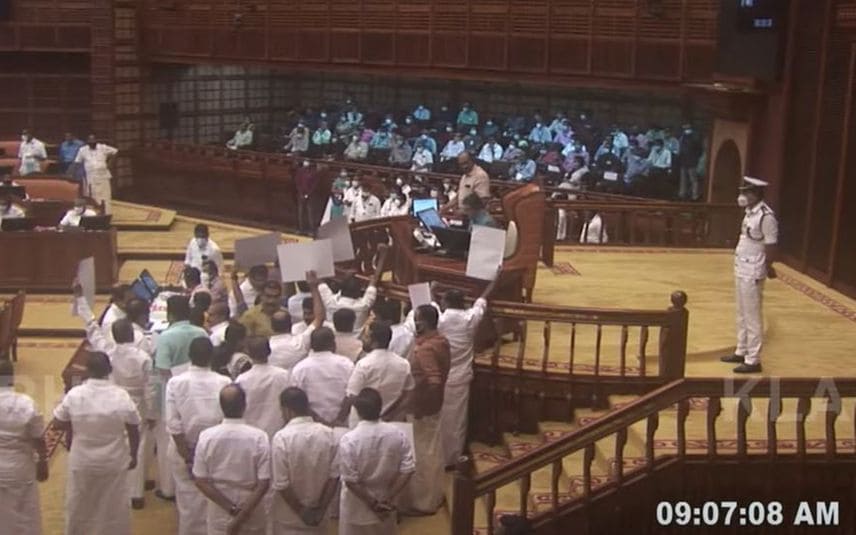 The protest at the Kerala Assembly

Thiruvananthapuram: Continuing protests over minister Saji Cheriyan’s anti-Constitution remarks, the Opposition disrupted the normal proceedings of the Assembly on Wednesday. When the House convened in the morning, the Opposition MLAs raised slogans and came up with placards.

Due to the unrest, the question-answer session and zero hour were withdrawn. After approving the financial bills, Speaker MB Rajesh informed adjournment of the house for the day.

Meanwhile, slogans and placards reiterated Opposition’s demand for Cheriyan’s resignation. Even after the session dispersed, the Opposition staged protest near the entrance of the Assembly.

Cheriyan, a two-time legislator from the Chengannur Assembly constituency in Alappuzha district, while taking part in a meeting at Pathanamthitta, had said, "The Indian Constitution is not fair to the labour class as there is no protection for them." He slammed the judiciary and said, "In labour cases the courts are favourable to the business people and that's what has helped the Adanis and Ambanis."

His remarks stoked up controversy and escalated to a political row demanding his resignation.