No food, water, please rescue us from the battlefield, say students from war-torn Ukraine city 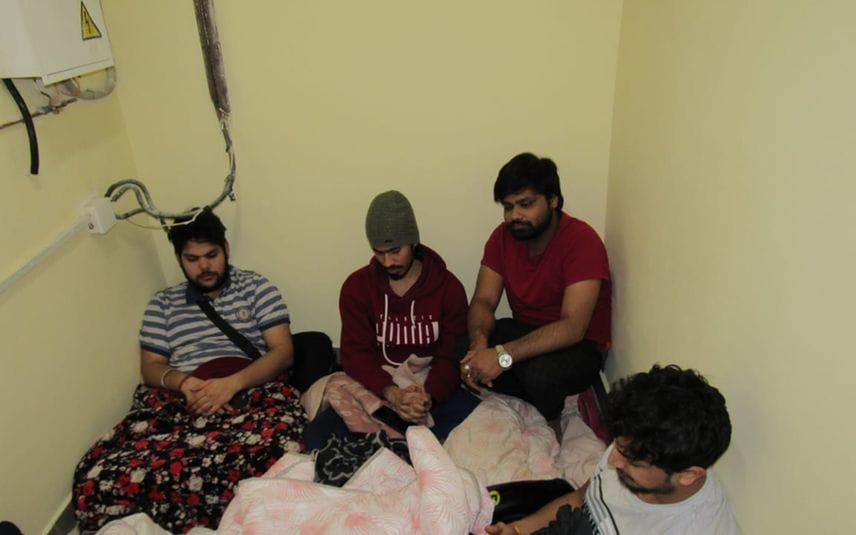 The students, who are stranded in Ukraine, sit at the basement of their hostel in Mykolaiv.

Kochi: At a time the Indian government claims that the measures to rescue the Indians who are trapped in Ukraine are in full swing, a group of around 250 students have been remaining in the basement of their college hostel in Mykolaiv for four days now. Their requests for evacuation have fallen on deaf ears and they say they don't even have food or water to survive.

Their requests to leave the country even before the war were rejected by the college authorities with an assurance that the scene would become calmer. However, the conflict escalated further and all among them have been trapped in various places in the city. A move to evacuate all of them on Friday evening was dropped halfway due to a security threat.

“It has been three days since we slept as the sounds of gun firings, blasts and fighter jets makes us panic. We sit on the floor very silently by keeping all lights turned off. There is a disruption in the power supply so we keep our mobile phones switched off to save energy. We can see bomb blasts and attacks just meters away from our hostel. We don't know what to do. The Indian government must take some measures to save us from this crisis,” said Shwetha Anil (24) from Malappuram.

Shortage of food is another worrying factor for them. “We don't have enough food and water to survive. On Saturday, we went outside a nearby ATM to get cash for buying food from shops. But there was no cash in the machines and all shops were closed, except a few government-run shops. Even in those shops there are not enough stocks available as the locals here purchase all food items massively. It created a shortage in the market and we don't know how long we can continue like this in this tense situation,” added Shwetha.

Another student, named Gowtham S (23), told mathrubhumi.com that a bus station near their hostel was blasted in the Russian attack and they all panicked by the artillery moving in and around.

“The Indian Embassy here does not answer calls, and there is no one to save us from the crisis. Our caretakers asked us to move to Romania to be airlifted by the Embassy there, but reaching Romania is in no way possible. The distance between Mykolaiv and Romanic is nearly 800 kilometres. No flights are operating now and reaching them via road is next to impossible in this situation. We don't know what to do,” said Shwetha.

She also said that they are trying to reach Moldova, which is nearly 300 kilometres from the place where they stay. “However, there is no embassy in Moldova and flying from there may not be possible without the intervention of the Indian government,” said Shwetha.

All these students were living in different places in the city, but for easy evacuation, they were asked to reach the hostel a few days ago. “However, evacuation has not become reality so far. A few students who had gone outside to buy food were forced to go to nearby accommodations after a warning siren. Now they also have to come back for the evacuation. A few among them are in touch with us but not all,” said Anil, another student.

According to the information provided by the Public Relations Officer (PRO) of Norka Roots, Nafi Muhammed, over 3,000 Keralites registered for repatriation with the Norka Roots. Among them, nearly 2,000 are students. Nearly 20,000 Indian students are stranded currently in Ukraine.

“Norka Roots will soon inform the Indian Embassy and the Ministry of External Affairs (MEA) about the situation of the students at Petro Mohyla Black Sea National University in Mykolaiv. Norka Roots have been in touch with the MEA and embassy to coordinate the rescue operations by providing the details of our students and other residents there,” said Nafi.
Conducting rescue operations in a war-affected country is a little riskier and it has its limitations, said Nafi. “Russia has shown interest in discussions now. Hope the issue will be resolved soon and all of them will reach back safely soon.”