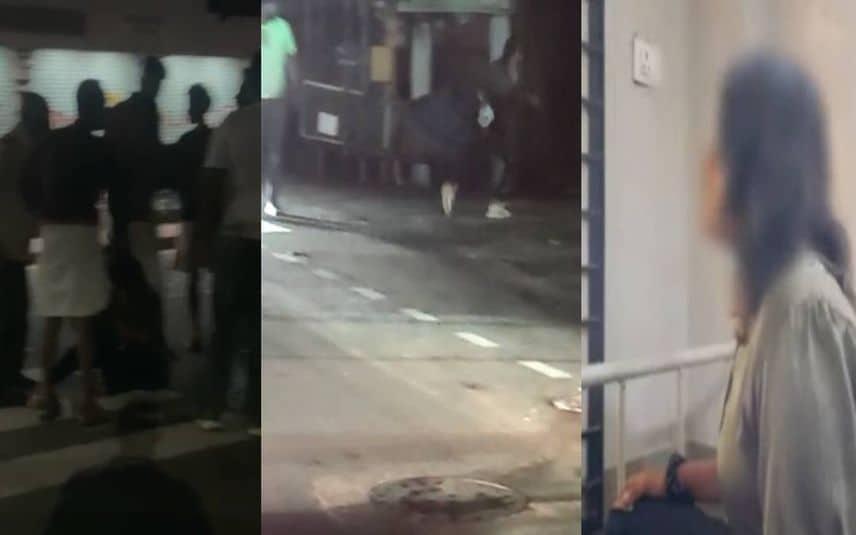 Visuals of the incident- The girl who suffered the attack / Photos: Screengrab of Mathrubhumi News

Kottayam: Police have arrested three men for allegedly chasing down and attacking two college students near Central Junction here on Monday night. The accused have been identified as Thazhathangadi natives Muhammad Aslam (29), Anas Ashkar (22) and Shabeer (32). The purported visuals of the incident that happened around 10:30 pm surfaced on Wednesday revealing the high-handedness of the perpetrators.

The college students including a girl were reportedly on the way to give clothes to their friend, who was hospitalised. They stopped their two-wheeler at a roadside eatery near Bharat hospital to have food.

A group of men who were there approached and made comments about the girl and her male friend. The men reportedly questioned the girl why she was roaming with a boy at night.

The students questioned the men and later left the place on the two-wheeler. However, these men chased them down and blocked their vehicle. Following this, they allegedly thrashed the duo.

The police on patrolling duty happened to see the incident and intervened.Three of the men were taken to police custody while other officials hospitalised the injured students at Kottayam Medical College.

The accused men, all in their early twenties, have been booked for the offences under section 354 (molestation) and section 307 (attempt to murder), an officer of Kottayam West police station said.

"They were taken into custody on Monday night itself and after questioning, their arrest was recorded today. They will be produced before a court during the day," the officer said.

Reports suggest this is a suspected case of moral policing and mob attack.