The PFI workers, who were booked under UAPA and arrested by NIA last week from different locations in Kerala were presented by the NIA in the Court after their seven days of custody came to an end today. 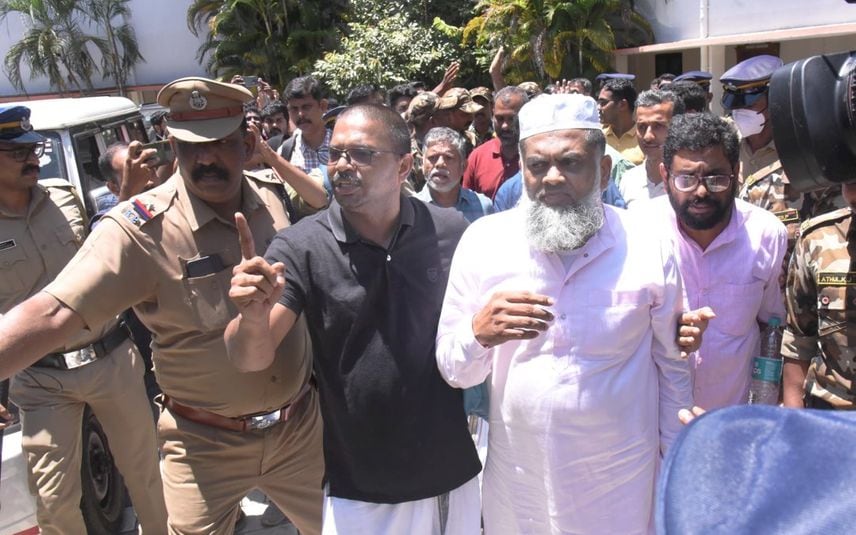 PFI members Yahiya Thangal, Karamana Asharaf Maulavi and PK Usman after being produced before a court in Kochi. Photo: PTI

Kochi: The National Investigation Agency (NIA) Special Court on Friday sent the 11 workers of the Popular Front of India (PFI) to judicial custody for 21 days.

The PFI workers, who were booked under UAPA and arrested by NIA last week from different locations in Kerala were presented by the NIA in the Court after their seven days of custody came to an end today.

Earlier they were sent to the custody of NIA by the Court for 7 days till today.

In a major breakthrough linked to the largest-ever action against the Popular Front of India (PFI), the Central investigating agencies have found inputs against the outfit for "organizing a training camp with an intent to cause disturbance during Prime Minster Narendra Modi's visit in Bihar's capital Patna on July 12 this year".

Besides, during the course of the investigation, the agencies have found details of numerous bank accounts of PFI.

The revelation came in two separate remand copies of the Enforcement Directorate-- one submitted before a special judge in Lucknow against Muhammed Shafeeque Payeth, resident of Kozhikode in Kerala, and the other against Perwez Ahmed before a special court in Delhi.

Both Payeth and Ahmed were arrested from Kerala and Delhi respectively on September 22 during a first-ever largest search operation conducted by a joint team of ED and the National Investigation Agency (NIA) and state police forces, arresting 106 PFI members from 15 states.

The ED had informed the court that it has been conducting an investigation against PFI and its related individuals and entities under the Prevention of Money Laundering Act (PMLA), 2002 under the Enforcement Case Information Report (ECIR) dated May 2, 2018, on the basis of various cases registered by the National Investigation Agency (NIA) and other Law Enforcement Agencies invoking Scheduled offences under Sections 120B, 121, 121A of Indian Penal Code, Sections 3, 4 and 5 of the Explosive Substance Act, Sections 25 and 27 of the Arms Act and Sections 13, 16, 17, 18 and 18(A) of the Unlawful Activities (Prevention) Act.

These cases of the predicate agencies pertain to unlawful activities carried out by PFI and its related individuals and organizations to indulge in criminal conspiracy with an intent to disturb communal harmony, spread terror, incite communal riots, impart training to their cadre to use explosives and weapons, form a terrorist gang and collect deadly weapons and explosive devices to simultaneously launch attacks on many important persons and sensitive locations.

The criminal conspiracy and activities in several of these cases had the potential to pose threat to the unity, integrity and sovereignty of the nation, read the remand copy.

Recently, the Ministry of Home Affairs (MHA) on Tuesday made the announcement through a notification declaring "the PFI and its associates or affiliates or fronts as an unlawful association with immediate effect".