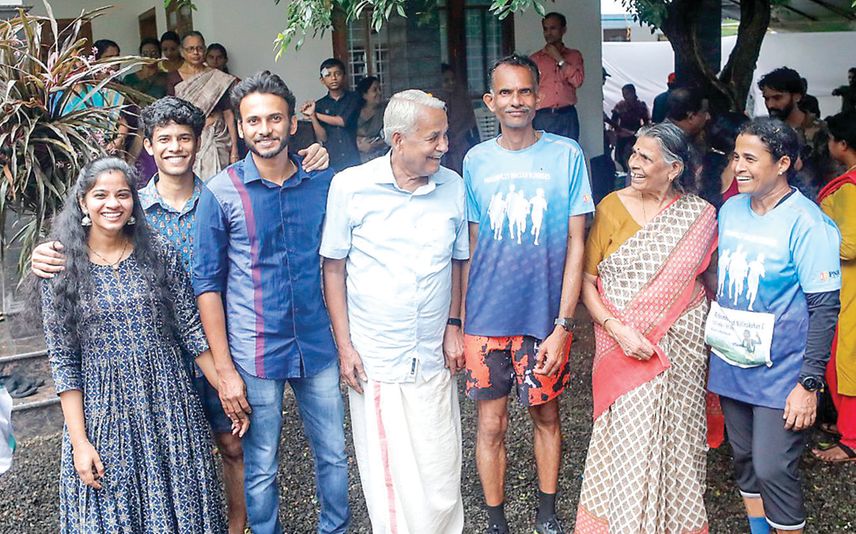 Ramanattukara: Nalinakshan and his friends ran for 38 hours straight and arrived at their house in Ramanattukara thronging with relatives awaiting their arrival. The sprinting gang ran approximately 165 kilometres from Kadavanthra to Kozhikode and were received with much love and zeal. Neighbours and office bearers of the residents association arranged a grand reception for Nalinakshan and other runners.

When Nalinakshan told his friends from ‘Panampilly Nagar Runners’ that he is shifting to Kozhikode, they decided to see him off to his house by running. Nalinakshan’s wife Ajaya also ran along with him.

K Nalinakshan, a 60-year-old man was an Assistant Engineer at the Ship Building Department in Cochin Shipyard and retired from his post on June 30. He was settled in Kochi for 38 years.

The marathon started in the early morning on July 2. The running was halted only for lunch breaks.

Nalinakshan is the son of Madhavan Nair and Kalyani Amma. Nalinakshan and his Wife Ajaya have two sons-Amith and Rajath.

Amith is an Assistant Loco Pilot in Indian Railways and his wife Nimmi is also a railway employee. Their younger son Rajath works at Grand Hyatt hotel in Kochi.