Mystery looms over death of TVM Youth, girlfriend claims Ayurvedic medicine was given to him 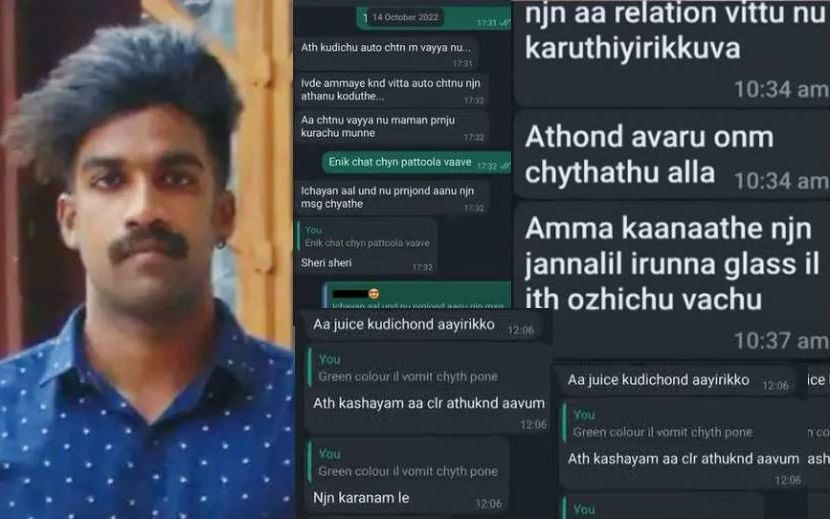 Thiruvananthapuram: Mystery looms over the death of a youth named Sharon who breathed his last on October 25 after consuming a drink from his girlfriend’s house.

A phone conversation between the girl and Sharon’s brother has come out on Friday. In the voice clip, the girl was heard saying that she had given an Ayurvedic medicine to Sharon when he visited her house.

A WhatsApp chat between the girl and the deceased youth also come out. During the WhatsApp chat, the girl claimed that she didn’t serve any poisonous drink.
Sharon’s family alleged that Sharon was murdered by giving acid.

The girl had told Sharon’s brother that she gave an Ayurvedic medicine called Kashayam which she consumed for curing body pain. She claimed that she had given the drink to Sharon when he asked about its taste. She also asserted that the medicine was not harmful as she used to drink it regularly.

At the same time, screenshots of the WhatsApp chat between Sharon and the girl also came out. Sharon had vomited and was hospitalised after consuming the drink at the girl’s house. When Sharon was hospitalised, the girl sent messages to him through WhatsApp. This chat has come out now.

The girl had told Sharon that she never thought that he will vomit after drinking kashayam. She also assured him that his family will never try to harm him as they think that she has ended her relationship with him.

Sharon had reached the girl’s house for collecting a project related to their studies. His friend Rijin also accompanied him.

Sharon was a BSC Radiology final-year student at a college in Tamil Nadu.