‘My hands were tied; I didn’t even get food properly’, reveals maggot infested COVID patient

Anil Kumar realised that his hands were tied up only after regaining consciousness. Though he tried to call for help, he was not in a condition to speak. 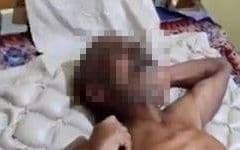 Thiruvananthapuram: The COVID patient at Thiruvananthapuram Medical College, who was infested with maggots, has revealed that the hospital authorities had tied his hands up and did not attend to him properly. The patient identified as Vattiyoorkavu native Anil Kumar told Mathrubhumi News.

Anil Kumar was hospitalised as he sustained injuries after falling down while returning from work. He tested positive for COVID-19. Anil Kumar's bystanders returned after buying him essentials required for 10 days. However, Anil Kumar said that he was not even given food properly after they left. Anil Kumar revealed that he fell unconscious after two days.

Tubes were connected for urination and defecation. Anil Kumar realised that his hands were tied up only after regaining consciousness. Though he tried to call for help, he was not in a condition to speak. As he was infested with maggots while he was unconscious, he did not realise it. Anil Kumar also said that he came to know about it only after his daughter told him.

Anil was shifted to the General Hospital after 10 days. Now he is slowly recovering and is able to move his hands freely. "The body parts infested with maggots are also healing. I hope to get well soon," Anil Kumar said.