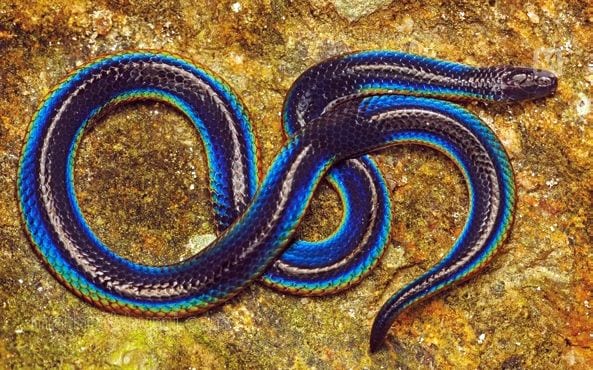 Kochi: A rare rainbow-coloured snake has been spotted near the hilly areas of Munnar town. Thrissur native Mridula Murali captured the snake’s photo on her camera. It is very difficult to get a photo of this rainbow-coloured snake as they spend most of the time beneath the ground and only come out during night.

The rainbow-coloured snake reportedly belongs to Melanophidium genus and also comes under species of shieldtail snakes. A shield-like shape can be seen at the end of snake’s tail. Only four varieties of this non-venomous snake have been discovered yet.

Mridula, her husband Murali along with others in the team captured picture of the rare rainbow-coloured snake while they were involved in taking pictures of frogs that are only spotted in Munnar.

Among the varieties of these snakes, the first variety Melanophidium wynaudense was first mentioned in reports in 1863. They are black in colour and it was identified that they were found in Wayanad-Agumbae stretch (Kerala-Karnataka). Later in 1870, the black two-lined variety Melanophidium bilineatum was discovered in Mananthavady of Kerala.

However, there is a doubt that whether it is a new species of the snake. Meanwhile, herpetologist Sandeep Das said that the same variety was discovered in Periyar Tiger Reserve and Peerumade-Kuttikanam region of Kerala.