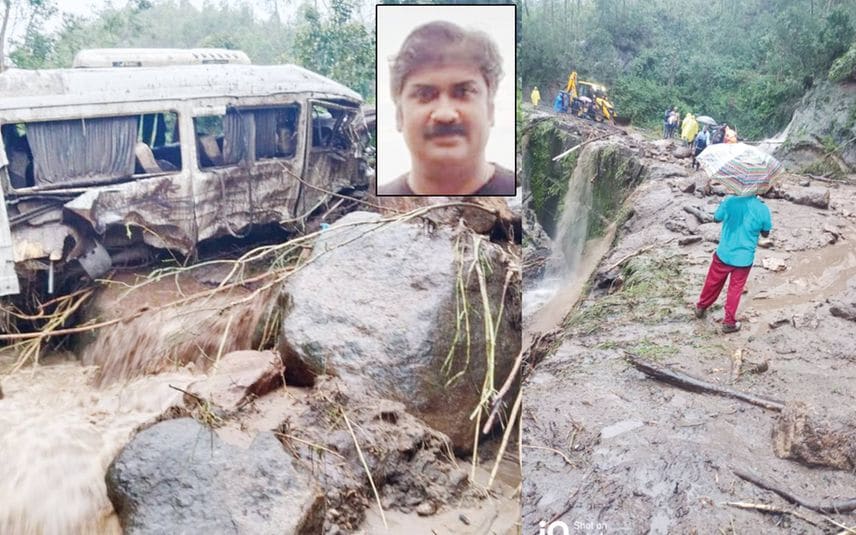 The vehicle that was washed down, deceased Roopesh (inset)

Munnar: The tempo traveller driver who went missing in the landslide at Puthukudi near Kundala here has been found dead here on Sunday morning. The deceased has been identified as Roopesh(40), a native of Kozhikode’s Kunnukkavu, near Ashokapuram.

The landslide hit the area on Saturday evening. Following the landslide, the tempo traveller overturned and landed on an adjacent tea garden on the Munnar-Vattavada road.

"The tempo traveller was part of a three-vehicle tour group from Vadakara. All other vehicles and passengers managed to escape but he is suspected to have been trapped inside the vehicle," said Munnar police.

Police said they have located the vehicle some 700 metres downhill, a region which is frequented by wild elephants.

Roopesh got trapped in the landslide when he was pushing the vehicle away from the collapsing land along with another driver. He ensured that all 10 passengers stepped outside and then only he started to drag the vehicle. But the vehicle plunged and was washed away to a depth of 750 metres. Later it came to light that Roopesh was missing. Officials and locals searched for him but the rescue operation was halted due to poor light and heavy rains. His body was found when rescue operations resumed on Sunday morning.

The tempo traveller carried 11 people including tourists from Vadakara. Two other vehicles in the tour group were also hit by the landslide. But Roopesh’s vehicle was apparently in the spot where the landslide hit. Reports suggest Roopesh’s timely intervention saved all other commuters in his vehicle.

The weatherman had issued Orange alert for Idukki today and a Yellow alert for the next two days indicating heavy rains.