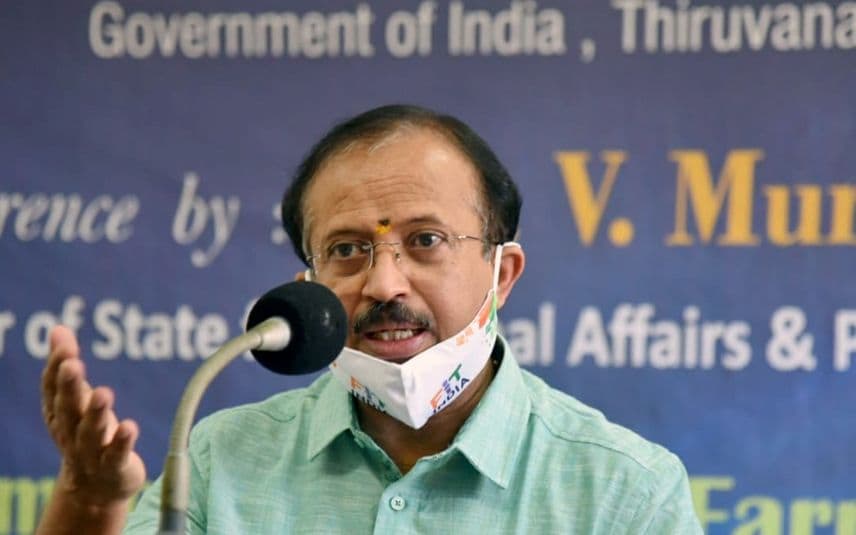 Kochi: Union Minister of State for External Affairs V Muraleedharan on Friday slammed LDF MLA KT Jaleel for his "Azad Kashmir" remark saying that his statement was "nothing less than treason."

He also demanded the resignation of Jaleel after the latter referred to Pakistan-occupied Kashmir (POK) as "Azad Kashmir".

"An elected MLA of Kerala saying that the Kashmir which is part of India, is an Indian occupied Kashmir and describing the Kashmir which has been occupied by Pakistan as Azad Kashmir. It is nothing less than treason. It is a very-very blatant anti-national statement," said Muraleedharan.

He further said that the Kerala MLA should be prosecuted before the law.

"He should be asked to resign. It is a shame on the people of Kerala that such a person is represented in the legislative assembly of Kerala. His party should ask him to resign forthwith," the Union Minister added.

Earlier, former Kerala minister and MLA KT Jaleel, who recently visited Kashmir, sparked controversy by referring to Pakistan-occupied Kashmir as "Azad Kashmir", adding that the people of the valley have forgotten how to laugh due to the strong deployment of security forces in the Union Territory of Jammu and Kashmir.

He said that Pakistan does not have major administrative control over the occupied part of Kashmir (PoK) which Pakistan refers to as 'Azad Kashmir'.

The Kerala legislator in his social media post said, "the part of Kashmir that is with Pakistan was known as 'Azad Kashmir'. The Pakistani government did not have a direct influence in this area. Only the currency and military help were under Pakistan's control."

Jaleel further said, "Azad Kashmir had their own military. During Pakistani President Zia-ul-Haq's time, the military became the common one. The Pakistan government does not have any major administrative power in the Pakistan-occupied Kashmir."

The Kerala MLA said the heavy deployment of forces has altered the essence of Kashmir. He said Kashmiris are longing for normalcy in the valley. Jaleel claimed he found anger among Kashmiris against the Centre for bifurcating the erstwhile state of Jammu and Kashmir.

"Wherever you look, you see only Army with rifles. It seems like Kashmiris have forgotten to smile. For decades the colour of Kashmir is army green. All politicians are under house arrest. No political activities for months. In its second term, the Modi government has divided Kashmir into three parts and the anger can be read on people's faces. Was revocation of Article 370 able to meet its purposes? People in Kashmir are hoping to go back to normalcy," added the CPM fellow-traveller.

Meanwhile, Kerala BJP slammed Jaleel for his narrative on Jammu and Kashmir.

"This CPM leader has insulted our armed forces and negated India's official position on Kashmir. He is a traitor," said Kerala BJP state president K Surendran.

In August 2019, the central government scrapped Article 370 which gave special rights to the people of Jammu and Kashmir and bifurcated the region into two UTs - Jammu and Kashmir, and Ladakh.