Moolamattom: A quarrel erupted for food had culminated in the death of a youth in Idukki on Saturday night. By the time Philip Martin and his niece Jiju arrived at a hotel in Ashoka Kavala, the beef and ‘botty’ they had asked for was sold out.

The lady who runs the hotel offered them the vegetarian food left in the hotel. But he denied it and started to shower verbal abuse at her by seeing other customers having the same food they ordered. Though the hotel owner attempted to pacify him by saying that those customers had pre-ordered food, the accused did not heed to it. The issue turned violent when the other people intervened and Philip got thrashed by them. 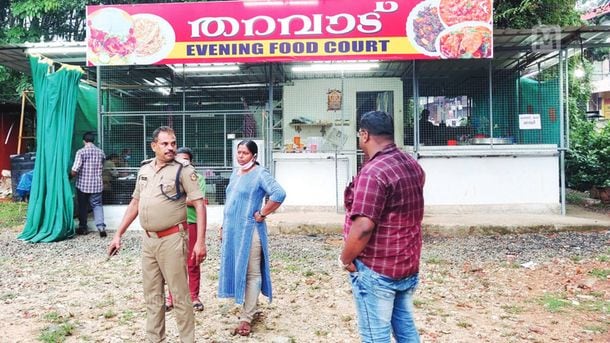 Police said that this provoked him to return home to take the gun and fire it at the hotel. He had fired the double-barrel gun to air by holding it in one hand.

Police have initiated a probe to find from where he acquired the gun. Philip had informed the police that one of his friends in Karinkunnam plantation had given him the gun in 2014. When the investigation team reached the house of the person who presented a gun as per the statement of the accused, the police found that he was no more. Philip had also said that the gun was bought for the plantation he owns at high range.

He had taken five bullets from the house and out of which four bullets were fired amid the clash on Saturday. Philip had first fired at the autorickshaw stopped at the school junction. Then he drove the car at a high speed from Arakkulam to Moolamattom and then returned. By seeing him, the people gathered in the street ran in fear. Sanal Babu and his friend Pradeep were attacked later. In the firing that followed, Sanal was shot on his neck.

Sanal’s relative Thiruvonam Thankachan said that Sanal was accidentally fired amid the clash. They were passing through Arakkulam when the clash happened.

Muttom police had nabbed Philip who was trying to escape after shooting Sanal. He was also injured in the attack of the hotel customers and hence the police took him for medical examination at 12.15 am on Sunday. The accused was brought to Kanjar police station by 4.15 am on the same day.