This Kozhikode town 'flooded' even in the scorching summer

control room was also set up by the Fire and Rescue Services in Kannadikkal as a part of the mock drill. 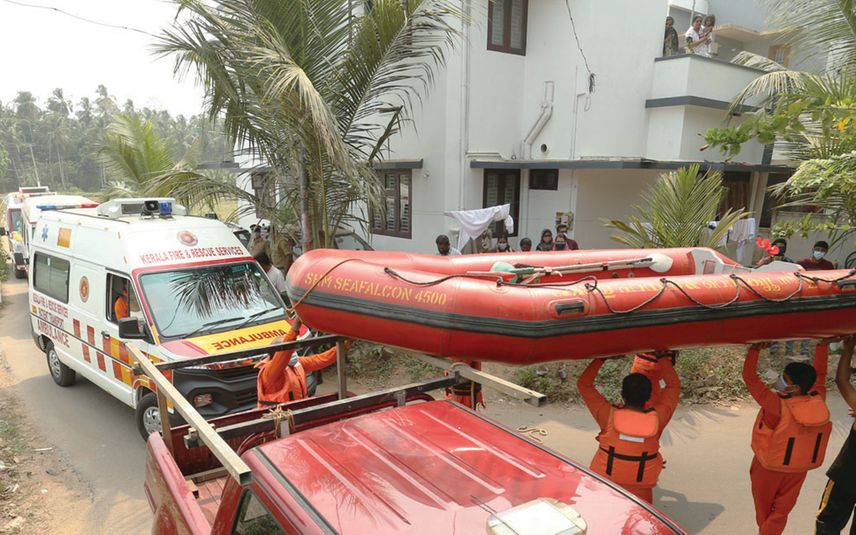 Kozhikode: A message from officials of the Water Resources Department was received at the Collectorate control room by noon on Wednesday. It read - ‘13 houses in Kannadikkal flooded as Poonoor River starts overflowing’. Three vehicles of Fire and Rescue Services with the scuba team and dinghies to carry people rushed to Vadakkevayal within twenty minutes. The message was sent to initiate a mock drill that was conducted in Kannadikkal in Vadakkevayal as a part of precautions to be taken during a flood.

Although the whole thing was part of the mock drill, the members of the scuba team that exited from the vehicle wore a grave expression as if they were facing a real disaster. People were rushed into vehicles and moved to ‘safe’ locations as per the drill. 40 people from 18 families were shifted in this manner. A local named Ayishabi said while entering the vehicle that every year the people in their locality are forced to move out similarly during the rainy season due to flooding.

Many stood dumbfounded by the trail of police and Fire and Rescue vehicles that were riding off by blaring sirens. Their anxiousness wore off only when they realised that it was a mock drill. Kannadikkal natives presented their list of problems before Collector N Tej Lohith Reddy who arrived as the drill was nearing its end. A few raised the complaint that they have not yet received the compensation amount promised for the losses they had to face in the flood.

A control room was also set up by the Fire and Rescue Services in Kannadikkal as a part of the mock drill. The camp was arranged in Silver Hills Higher Secondary School in Vellimadukunnu.

Disqualified in sub-district, this Vanchipattu team leaves Kalolsavam with a smile

Story of Sharun: From tribal hamlet to bagging A grade in Kalolsavam