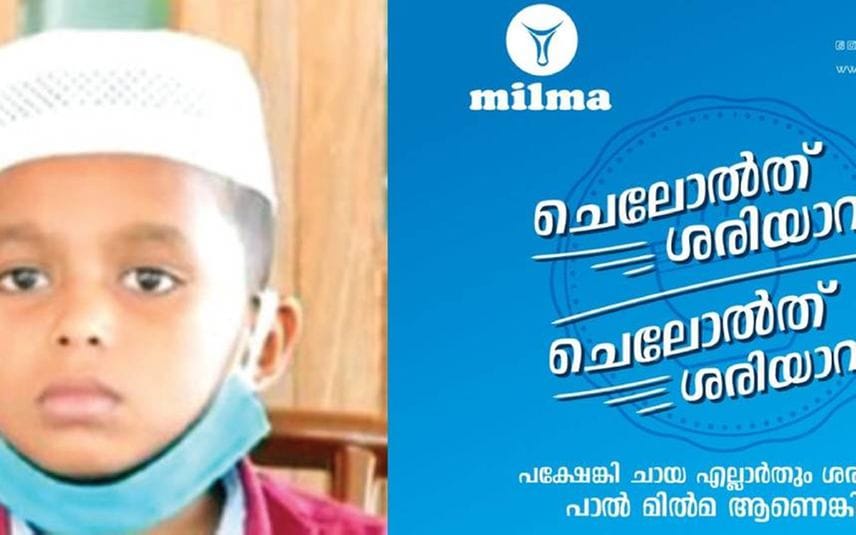 Malappuram: Fayis, a fourth standard boy, never imagined a video he secretly captured on a mobile camera will put him in the limelight. Now, Malabar Milma has adopted his dialogue in the video and made its advertising slogan.

Milma slightly modified it as “Chelold seryavum, chelold seryavoola. Pakshenki Chaya elloldm seryavum, pal Milma aanenkil” (for some it would be ready, for some it may not; But the tea would turn right if the milk used is Milma). After it was posted on Milma’s Facebook page, there was a huge response praising and congratulating Fayis. Many even asked Milma to reward the boy.

Muhammad Fayis, son of Abdul Muneer of Kizhissery, is a Class 4 student at the Izzathul Islam HSS, Kuzhimanna. He had secretly made a video on how to make a paper flower. However, the final output didn’t turn out as expected. But Fayis handled the situation really well.

The video was later found by his sisters and they sent it to his father in Gulf. He shared it with family and it went viral.

His positive nature and optimistic attitude seen in the video was praised by one and all.

Malabar Milma MD KM Vijayakumar said they decided it as the tagline as the dialogue had already reached many people and garnered good response. He also told Mathrubhumi that they would consider the public demand of rewarding Fayis.