Three arrested by Anthikad police for stealing battery of vehicle

Thanniyam native Akhil (21) and Pazhuvil native Mohammed (42) were arrested over the case of stealing battery from a car in Kizhuppillikkara that was brought for patchwork. 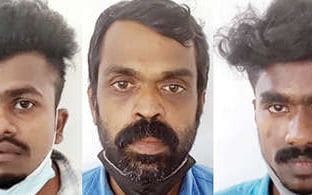 Anthikad: Three men were arrested by the Anthikad police on charges of theft and abduction.

Thanniyam native Akhil (21) and Pazhuvil native Mohammed (42) were arrested for stealing battery from a car in Kizhuppillikkara. Akhil was taken into custody from Peringottukara. Mohammed is also an accused in the abduction of a girl.

Peringottukaar native Abin (21) was arrested earlier for abducting a girl last September. They had taken the girl forcefully into their car and robbed her bag and mobile phone. The accused made the girl stand with them for photographs and threatened to inform the matter in her house.

The girl was dropped off at Anthikad. The girl went to the police station with the complaint. Mohammed was nabbed from Malappuram and Abin from Thanniyam.