Massive fire breaks out at godown in Kozhikode; no casualties 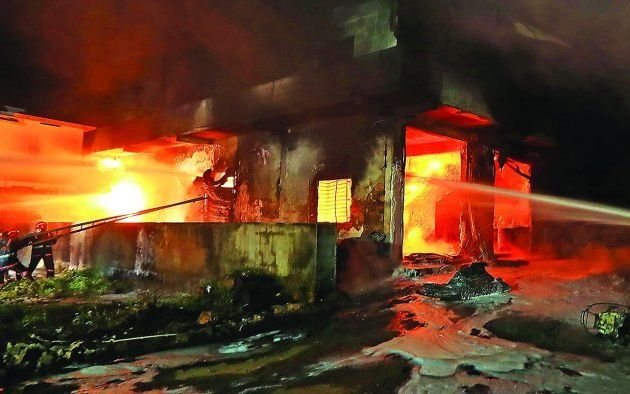 Feroke: A massive fire broke out at a godown at TP Road in Cheruvannur, Kozhikode. The godown stores raw materials for making paints. It is suspected that fire broke out while transferring thinner, a solvent used to thin paints, from a tanker lorry to the barrels. The timely intervention of the fire force unit in moving the tanker lorry away from the fire averted a major disaster. Meanwhile, a case was filed against the godown owner after it was found that the company did not have a licence to store raw materials used for manufacturing paint.

The fire broke out on Tuesday evening at a godown owned by Shihabudheen, a Perithalamanna native. Suhail(19), who was inside the godown at the time of the accident, escaped with burns. Anoop, a worker who accompanied him, escaped unhurt.

The fire also caused damage to an apparel-making company and two houses nearby. The natives said that the company was set up amidst a densely populated area thereby leaving families at the risk of such incidents in the future. The fire force unit doused the fire later in the night with the combined effort of locals and Feroke police.