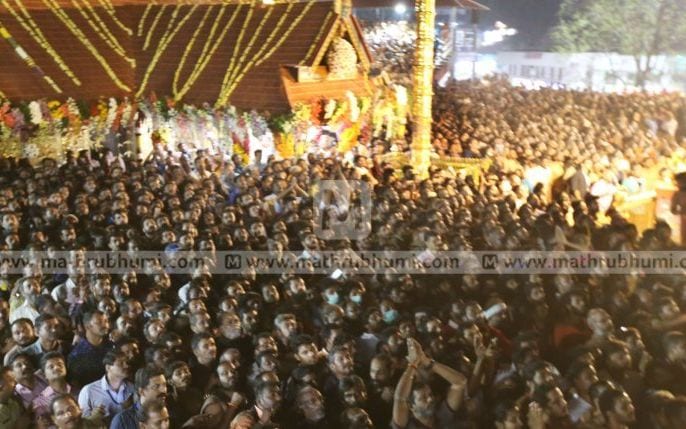 Sabarimala: Huge crowd thronged the famed Ayyappa temple here to witness the auspicious Makaravilakku, after which the over two-month-long annual pilgrim season ends. Devotees had occupied different points in and around Sabarimala, hours before the ceremony, to have a glance of the Makaravilakku.

Throughout the time, the 'sannidhanam' (temple complex) atop the hillock and base camp on the banks of river Pampa reverberated with chants of Swamiye Saranam Ayyappa.

The portals of the shrine were thrown open after the 'deeparadhana' in the evening, which was performed to the idol of Lord Ayyappa was donned with holy jewels 'Thiruvabharanam'.

A team led by temple executive officer, received the procession carrying thiruvabharanam, earlier the day at Saramkuthi, a pilgrim spot on the way to the shrine. The jewels were brought from the Pandalam palace, where, according to legend, Lord Ayyappa had spent his childhood. Later, the sacred jewel box was handed over to the team comprising state Devaswom Minister, TDB president and special commissioner and was brought to Sannidhanam.

The ritualistic deeparadhana (aarthi) was held at Ponnambalamedu, the hill facing the shrine, as part of the annual festivities. The 'Saranam Ayyappa' chants intensified when the 'makarajyothi', considered a divine light by devotees, flickered across the eastern horizon above the Ponnambalamedu soon after the aarati.

In view of the continuing heavy rush, more personnel of police, NDRF and Rapid Response Force were deployed in and around the shrine for crowd management and to ensure the safety of devotees.

The shrine will close on January 21, bringing to end the pilgrim season.

Pathanamthitta: Sabarimala has been placed ...