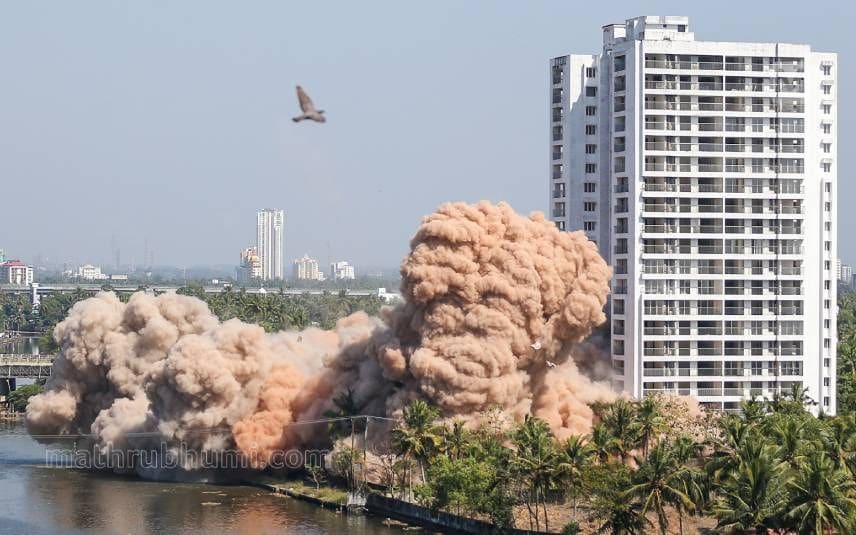 Kochi: The owners of the demolished flats at Maradu have reimbursed only Rs 37.32 crore instead of Rs 120.98 crore. The owner of Holy Faith hotel, which had the highest number of residents before the demolition has paid back no compensation yet. Instead of Rs 32.76 crore, Jain Constructions only paid Rs 16.76 crore to the customers while Alpha Ventures handed over Rs 13.80 crore instead of Rs 32.10 crore. Vichus Construction company, which was the owner of Golden Kayaloram returned Rs 6.76 out of Rs 13.97 crore.

It was on May 8, 2019, four apartments in Maradu were demolished over violation of Coastal Regulation Zone (CRZ) rules as per the Supreme Court order.

The flat owners have to clear payment of Rs 120.98 cr including the compensation to the customers who bought flats, the amount spent on demolishing the flats, and the expenditures of the Justice Balakrishnan Nair committee.

However, in a reply to the Right to Information filed by Popular Channel president MK Haridasan, the Balakrishnan Nair committee revealed that the committee was not directed to forcefully obtain the compensation from the owners of the Maradu flats.

By including Rs 25 lakh disbursed by the state government as compensation for each customer, all residents of Golden Kayaloram, Jain Coral Cove and Alpha Serene received the assured recompense. The residents of Holy Faith obtained only the money distributed by the government.

A total fund of Rs 62.75 crore has been dispensed by the government as compensation by providing Rs 25 lakh for each. However, the flat owners have to pay this amount back to the government. But, the Supreme Court has not directed how the money should be recouped from the owners.

An expenditure of Rs 3.70 crore was incurred for the demolishing procedures. The owners have to pay Rs 3.35 crore to this account while Rs 35 lakh was already obtained by selling the debris collected after knocking down the flats. A total of Rs 2.59 cr is estimated as the expenditure of the Justice Balakrishnan Nair committee.

SilverLine: Not an inch of land will be forcefully acquired, assures Kodiyeri

Compensation for families of Covid victims will be distributed soon: Kerala CM

Controversy over disparity in compensation for Pettimudy and Karipur victims; CPI criticises govt