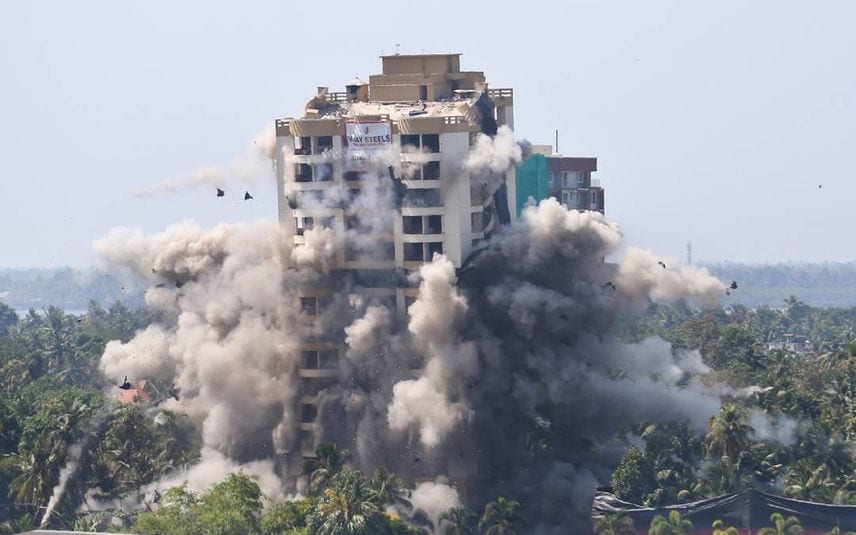 New Delhi: The supreme court directed the builders of Maradu flats to pay at least half of the amount that should be given to the flat owners as compensation. The bench headed by Justice Navin Sihna made it clear that the court will order for revenue recovery, if they did not remit the amount.

The builders should clarify their stand before the case is considered on Wednesday, the court directed. A total of Rs 61.5 crore should be given to the flat owners by all four builders. However, only Rs 4.89 crore was received, informed Justice Balakrishnan Nair committee.

Golden Kayaloram builders paid only Rs 2.89 crore out of Rs 9.25 crore they were asked to pay. Jain Housing Construction gave only Rs 2 crore instead of 15.5 crore. Alpha Serene that should pay Rs 17.5 crore and Holy Faith that should pay Rs 19.25 crore have not remitted a single rupee yet, committee further stated.

From the received amount, Rs 1.2 crore was handed over to the government for the expenses of the committee. Rs 3.75 crore of the remaining Rs 3.89 crore was invested in bank as fixed deposit.

The flat builders asked the supreme court to allow them to sell the properties to give the compensation amount. However, the court asked them why they did not raise the matter before the committee.

13 persons among the flat owners in Maradu do not have title deed of the property. However, they have the contract letter of buying the flat. Balakrishnan Nair committee had asked the court to decide if they should be given compensation. The top court made it clear that these flat owners also have right to get compensation.

The apex court also stated that the contempt of court petition filed against the chief secretary, who failed to submit the list of buildings that were constructed violating CRZ rules, will be considered later. This petition was filed by director Major Ravi.