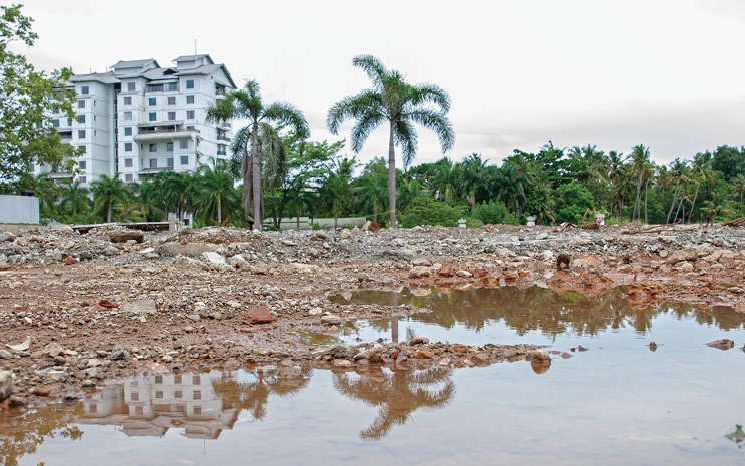 Kochi: It has been six months since the illegal apartments that came up on the banks of Vembanad Lake were razed. The place is covered in dead silence. Even the concrete debris have been removed leaving the place empty.

“We are bearing the brunt of someone else’s sins,” says the neignbours of the Alfa Serene apartment complex in Nettor, one of the four complexes that were demolished.

Golden Kayaloram, Jain Coral Cove, H2O Holy Faith and Alfa Serene were taken down as per Supreme Court order after it found the constructions had violated Coastal Regulation Zone rules.

The owners of the apartments have the authority over the land and now they can decide what has to be done with it.

However, according to nearby residents, the environmental issues due to the demolition still persists. Many of the houses developed cracks and have been weak in bearing load. Though Rs 2 lakh was offered to the owners of the houses that were damaged, only a meagre amount was provided, it is alleged.

Many suffered from dust allergy and breathing issues. Water in nearby wells became unusable.

When the swimming pool at Alfa Serene was demolished, nearby houses had to face issues. Seven families nearby had to shift to rented houses. It took months to get their houses back to normal after cleaning and repairing.

The debris of the twin towers of Alfa Serene that fell to the lake has not been removed yet. Fishermen say that debris worth two stories are still accumulated in the lake.

76,300 ton concrete debris was put behind after the explosions. Prompt Enterprises in Aluva had taken the tender to remove the debris. It took four months to completely clear the area.

The iron debris was taken to Kanjikode where it would be melted and then taken to Tamil Nadu. The concrete debris was taken to Vengola in Perumbavoor. This would be powered to M-sand. Though it was said that the equipment for it ‘Rubble Master’ would be brought from China, the decision was later changed.

Where are details of buildings that violated CRZ rules?; SC notice to Kerala govt

Govt not to takeover Maradu land

Doesn’t know who sanctioned Maradu flats and when, says Govt

It was a painful duty, says Justice Arun Mishra on Maradu flat demolition

Thiruvananthapuram: The Government plans to levy property tax and double taxation on illegally constructed buildings within city limits until they are ..

Idukki: A man and his wife died in a house fire here on Monday. The deceased was identified as Raveendran (50) and Usha (45). Their daughter Sreedhanya ..

Kannur: Over 45 passengers, including women and children, were stranded on road for 2 hours on Sunday night after a KSRTC Scania bus disrupted service ..

Did not send any official to study Delhi Education Model: Minister V Sivankutty

Palakkad: Senior Congress leader K Sankaranarayanan, who served as governor of various states during his decades-long career, passed away at his residence ..