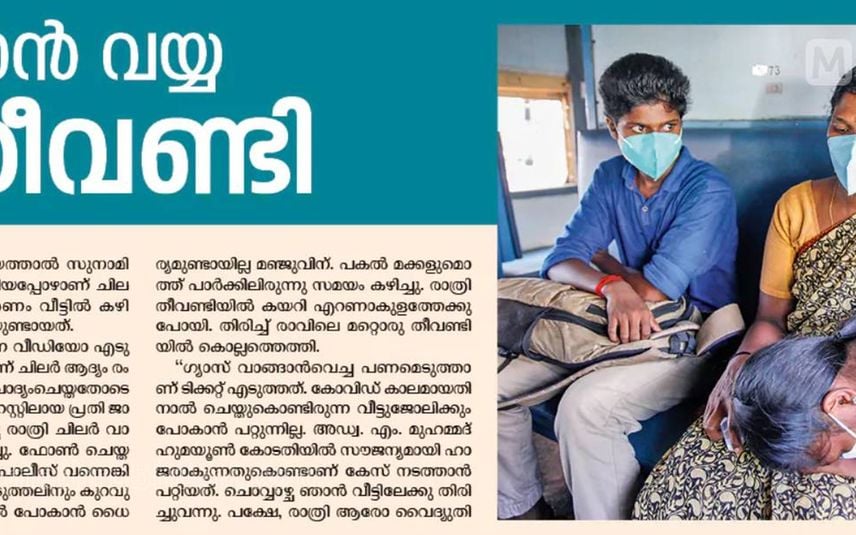 Kollam: Several people have come in support of Manju and her two children, who were forced to spend their time in train after receiving constant threats and harassment from anti-socials. 'Mathrubhumi' had published a report on their tragic story on Wednesday.

On seeing the report, many Keralites came forward in support of the woman and children who were living in their Tsunami flat in Eravipuram struggling to overcome the torture by anti-socials. However, there has been no significant intervention from the government in this regard.

Though the family tried to board the train on Thursday also, they did not get tickets and were forced to board a bus to Thiruvananthapuram. The family will return to Kollam on Friday.

The Women's Commission will collect evidence regarding the case on Friday and will arrange temporary accommodation for the family.

The authorities of Farooq College in Kozhikode has announced that they will take care of the education of Manju's daughter who has passed Plus Two. Since she is a softball player, the college had assured her that all training facilities education, accommodation and food will be provided for her. MGM Education group from Kottarakkara also gave a similar promise.

Gandhi Bhavan and Vaikom Gandhi Smriti in Pathanapuram have come forward to provide accommodation for the family. Narayana Panicker from East Hill, Kozhikode also offered aid for their studies.

Manju said that when she reached Ernakulam by train on Wednesday, the police helped her when she did not have enough money to return. "I thank Mathrubhumi for everything. I wanto to educate my children. I'm grateful to all who helped and supported us, "said Manju.

VK Beenakumari, a member of the Human Rights Commission, issued an interim order that the collector and the district police chief should take up the matter directly and resolve the complaint.

Collector B Abdul Nasser directed to submit the report within two weeks after resolving the complaint. As soon as the news came to his notice, the collector directed the Revenue Department to investigate and submit a report.

It's a new birth for me, says Swapna Suresh after joining HRDS as CSR head