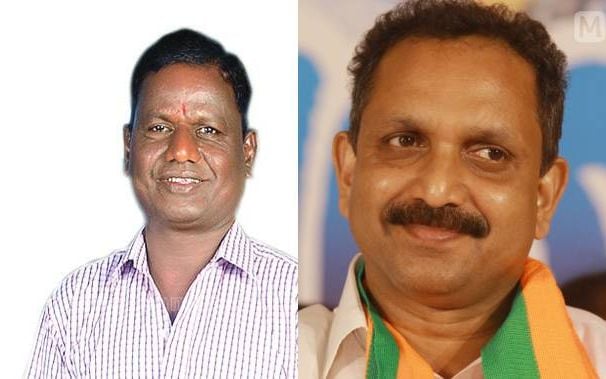 Kasaragod: BSP candidate K Sundara who was allegedly bribed by BJP state president K Surendran for withdrawing his candidature in Manjeshwaram constituency during assembly elections in Kerala, has come up with fresh allegations against the latter. This comes few days after K Surendran appeared before the Crime Branch for interrogation in connection with the election bribery case. According to the case, Surendran violated poll code by giving Rs 2.5 lakh and mobile phone to BSP candidate K Sundara for withdrawing his candidature in Manjeshwaram constituency.

Meanwhile, according to the detailed information disclosed by Sundara to Mathrubhumi News, Surendran has spent almost Rs 50 lakh to withdraw the candidature. He has alleged that Surendran offered him a liquor shop and a house. However, local BJP leaders treacherously took Rs 47 lakhs and shared among them while around Rs 2.5 lakhs was given to him, he claimed. Sundara said that he got to know about this from a friend who works for BJP.

Interestingly, Sundara had gone missing from March 21, 2021 and BSP members lodged a case. Now Sundara claims that he was at K Surendran’s election committee office in Jodkal under the monitoring of BJP activists. His phone was switched off by them. At night they give him liquor and food.

Sundara claims that when he talked to Surendran, he offered him a liquor shop in Karnataka and assured he will help him to renovate his house. Sundara also revealed that he is a close acquaintance of Surendran.