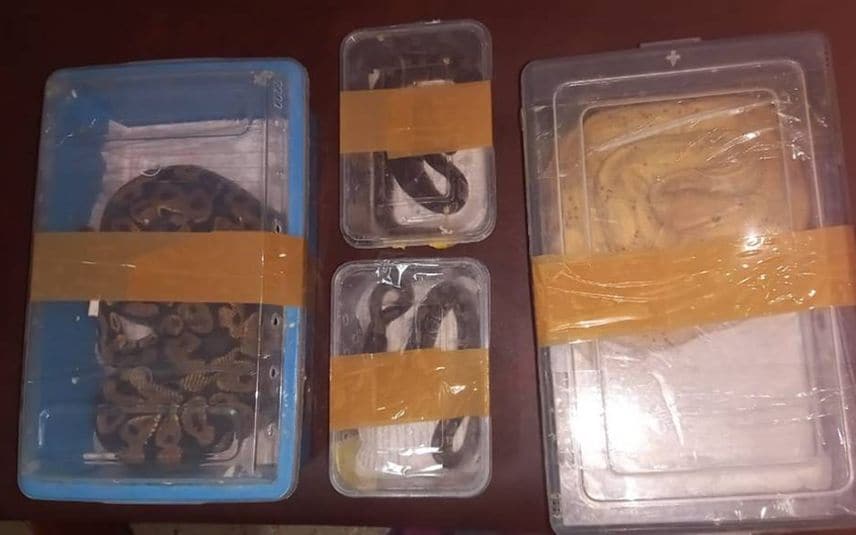 It is reported that the snakes were African ball pythons ordered by Kannur native Muhammed Isham via an agency in Delhi. The pythons brought from Africa by air freight cost lakhs here.

The Forest Department has not registered any case as these pythons do not fall under Wildlife (Protection) Act. However, according to Railway Act 145 (B), a fine of Rs 500 was imposed for taking the snakes in a passenger coach. Muhammed Isham received the boxes carrying the snakes after settling the fine.

Four pythons carried in plastic boxes in an AC coach of Nizamuddin- Thiruvananthapuram Rajdhani Express were seized from a bedroll attendant on duty on the train. It is learnt that the agency had hired the bedroll attendant to despatch the boxes to Isham.

Muhammed Isham said that he used to rear and sell African ball pythons by purchasing it online. He had asked the agency to send it via courier. But he was unaware that the pythons will be dispatched in a passenger coach of the Express, he said. Isham asserted that he has all the documents required to purchase the pythons.

Domesticating African ball pythons have become quite popular in Kerala following the lockdown, said Dr Jaffer Palote, a scientist in the Zoological Survey of India in Pune. These snakes have a lifespan of at least 20 years. But, rearing the snake may affect the ecological balance if they are released and later grew in numbers.