Tushar Gandhi who joined Congress Bharat Jodo Yatra on Friday, said, "It is true that Veer Savarkar was friend with the British, he apologised to the British just to move out of prison and it is not like we have taken it from WhatsApp University, there is evidence in history." 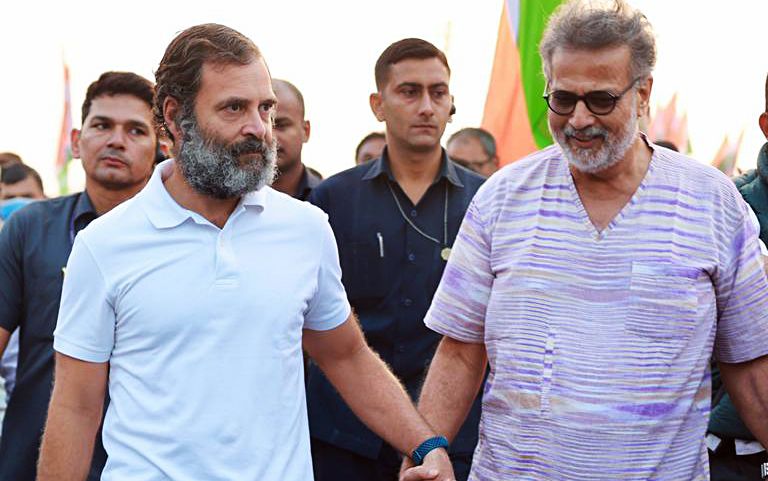 Shegaon: Mahatma Gandhi's great-grandson and writer Tushar Gandhi backed Congress leader Rahul Gandhi's claim on Veer Savarkar and said that Savarkar had apologised to the British to move out of prison and there is evidence for the same in the history.

Tushar Gandhi who joined Congress Bharat Jodo Yatra on Friday, said, "It is true that Veer Savarkar was friend with the British, he apologised to the British just to move out of prison and it is not like we have taken it from WhatsApp University, there is evidence in history."

"In Andaman jail, Savarkar wrote a letter and told the British to forgive him and release him from jail. Veer Savarkar took a pension from the British, he worked against Congress. After coming out of jail he accepted the British proposal and joined their force," he said leading to a political row.

Talking about the Bharat Jodo Yatra in Maharashtra, Tushar Gandhi said, "Yatras are part of a tradition, have given birth to several revolutions over the years. Today when the country is moving against the construct that our forefathers set, it becomes important for people to realise that we have not given up."

Congress leader Rahul Gandhi on Thursday raked up Veer Savarkar again and alleged that he betrayed leaders like M.K Gandhi, Jawaharlal Nehru and Sardar Patel by signing a letter of apology to the British before independence.

Addressing the media here during the Bharat Jodo Yatra, Rahul Gandhi said, "Veer Savarkar, in a letter written to the British, said "Sir, I beg to remain your most obedient servant" and signed on it. Savarkar helped the British. He betrayed leaders like Mahatma Gandhi, Jawaharlal Nehru and Sardar Patel by signing the letter out of fear."

Before entering Maharashtra, the Yatra has already covered parts of Tamil Nadu, Kerala, Karnataka, Andhra Pradesh, and Telangana. Rahul Gandhi will travel through 15 Assembly and 6 Parliamentary Constituencies in five districts of Maharashtra and would cover a distance of 382 Kms.

Bharat Jodo Yatra, which began on September 7 from Kanyakumari, will cover a further distance of 2,355 km in its 3,570-km march. It will end in Kashmir next year. It is the longest march on foot by any Indian politician in the history of India, the Congress claimed earlier in a statement. Bharat Jodo Yatra is getting support from various political parties and social organizations across the country.

Notably, all the party MPs, leaders and workers, along with Rahul Gandhi, are in containers. Sleeping beds, toilets and ACs are also installed in some of the containers. The arrangements have been made keeping in view the intense heat and humidity with the change of places. The Congress suffered a debacle in the assembly polls held earlier this year and the Yatra is seen as an attempt to encourage the party rank and file for the upcoming electoral battles.