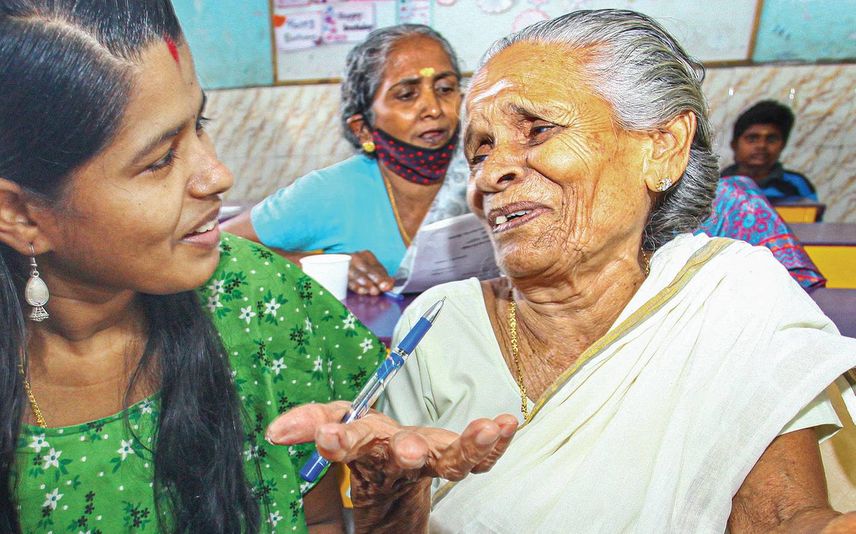 Alathur (Palakkad): Madhavi Amma who dropped schooling 86 years ago arrived at Govt UP School in Puthiyankam to attend an examination. At the age of 95, Madhavi Amma had reached the school to attend the basic literary assessment of Padhna Likhna Abhiyan, a literacy programme of the central government.

Though she attempted to learn again when the institution of Kerala State Literacy Mission was established, she could not pursue learning due to the hardships of life. She was married to a driver Karunakaran at a very young age. Her husband passed away 45 years ago. She had strived a lot to earn a livelihood with her four children.

When the Padhna Likhna Abhiyan launched in the state, Saksharatha prerak Ambujam invited Madhavi to attend the classes. Thus, Madhavi Amma who dropped out of class 2 decided to resume her learning. She was one among the people who attended the preliminary level examination of the literacy scheme on Sunday.

Madhavi Amma was the eldest among the half a lakh of candidates who appeared for the exam in the district. She wrote the exam by sharing the bench with the youngest candidate of the centre Surya (24).

Surya, a native of Palani reached Alathur after marrying a Malayali. She is learning Malayalam to turn completely into a Keralite.