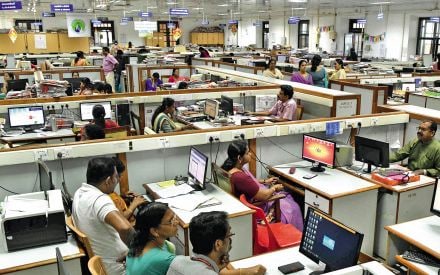 Thiruvananthapuram: Recently, Kerala Vigilance and Anti-Corruption Bureau (VACB) said they had unearthed large-scale irregularities in the sub-registrar offices in the state. In addition to money, many government department officials demand bribes ranging from basic commodities, luxury goods to even sex.

The testimony of the vigilance officers is that some officials stopped accepting bribes and shifted to other means. However, these practices largely goes unnoticed in government offices and only come to light during VACB raids.

In the last five years, 127 people in government offices were nabbed for bribery cases.

Meanwhile, vigilance nabbed 40 officials taking bribes this year alone, including those who accepted money through electronic means. In fact, the majority of staff caught while accepting bribes are from the revenue department, followed by employees at the local self-governing institutions. The arrested individuals include people from various professions like ophthalmologists, Supplyco managers, police officers and education department officials.

It was also found that officials even accept bribe to issue revenue certificates. Some of those arrested this year demanded up to Rs 75,000.

Manoj Abraham, State vigilance director, said that the public should inform authorities about officials demanding bribes. He added that through this means, we could create a corruption-free state.

Illegal property acquisition: P Jayarajan may file complaint along with ...

"Love that I got from her..." Rahul Gandhi makes emotional post