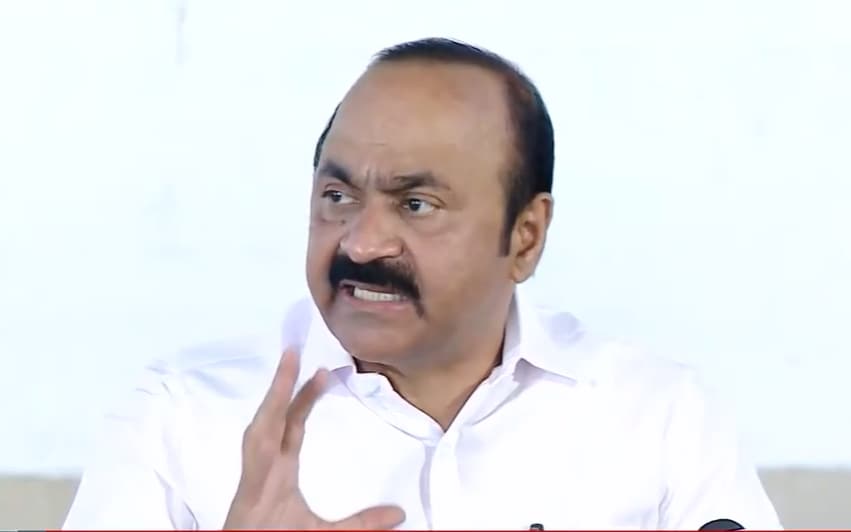 Kochi: Leader of Opposition (LoP) of Kerala VD Satheesan on Saturday said that the state Governor's letter to President Droupadi Murmu against the Chief Minister Pinarayi Vijayan was "drama" to divert attention from public issues including price hike.

Addressing a press meet here in Kochi, VD Satheesan said, "The governance crisis in the universities was created by the government itself. There is no war between the government and the governor except for verbal hesitancy. The Governor's letter to the President of India against the Chief Minister is a drama to divert attention from public issues including price hike."

Notably, Kerala Governor Arif Mohammed Khan has written to President Droupadi Murmu alleging that Chief Minister Pinarayi Vijayan and his minister's foreign visit was not conveyed to him "officially".

According to sources from Raj Bhawan, Governor Khan wrote to the President in the second week of October that he was not informed about the chief minister's foreign visit for October first week.

Earlier, an October 18 press release from the Chief Minister's Office shared the details of Kerala's official delegation's visit to the European countries which was aimed at advancing the progress of the state.

According to the press release, the visit was aimed at increasing cooperation in the fields of study and research, finding new job opportunities for Keralites, helping non-residents, exchanging ideas with the Malayali community and attracting more investors to the state.The group visited Finland, Norway and the UK.

Accusing the Vice-Chancellors whose resignations were demanded by Governor Arif Mohammad Khan, Satheesan said that they were appointed to appoint close aids of the party leader.

"Puppet Vice-Chancellors were appointed to appoint wives and relatives of party leaders. Backdoor appointments are happening everywhere," he said.

VD Satheesan further said, "The Chief Minister has committed a breach of oath by asking the Governor to appoint a person from his district as the VC of Kannur University. In exchange for this, the Sangh Parivar associate was made a staff member of the Governor."

Talking about Thiruvananthapuram Municipal Corporation Mayor Arya Rajendran's letter to the Communist Party of India (Marxist) CPI (M) leader, Satheesan said that the mayor should resign as she violated her oath.

In a Letter sent to the CPIM District Secretary Aanavoor Nagappan, Mayor Arya Rajendran demanded a priority list for appointing party members to 295 temporary posts in the Municipal Corporation.

The letter mentions appointments to 295 temporary posts vacant in the health department on a daily wage basis.

"Thiruvananthapuram Municipal Corporation Mayor Arya Rajendran, who violated her oath by writing to the CPIM district secretary demanding the party's priority list in the appointment of 295 employees in the health department, should resign. CPM should be ready to expel the Mayor if he does not resign," VD Satheesan said.

"Department heads are also reluctant to report vacancies to the Public Service Commission (PSC) because CPIM state committee and district committee appointees continue to be appointed through the back door. Applicants from the PSC rank list are visiting ministers' houses to report vacancies," he further said adding that the letter has revealed the misdeeds of a government.

"Appointments in Municipal Corporations have been given to local committees. They are cheating the poor people who come to interview for jobs. Direct recruitment is not done in any sector. Mafia gangs are working around CPIM offices to make backdoor appointments," he added. (ANI)