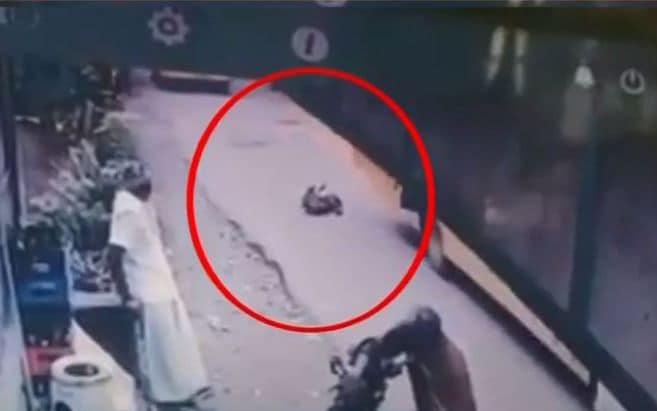 Kochi: An LKG student fell off a moving bus here in Aluva on Thursday afternoon. The girl who fell through the emergency door of the bus was saved from a gruesome accident by locals just in the nick of time. The student fell off the school bus of Al-Hind Public School, Pengattussery.

The girl did not suffer serious injuries but has bruises and body pain, her family said.

The family alleged that the bus driver and the school officials did not take the girl to the hospital on time after the accident. They said that the girl was dropped off at their home after dropping all other students. The girl was taken to the hospital after she started showing uneasiness and only then did the family come to know about the bruises on her body and the accident that took place. The family alleges that the school authority did not take necessary action or inform the matter to the family on time.

The onlookers rushed to save the girl after seeing her fall from the bus and stopped the vehicles that were coming from behind. They also stopped the school bus and the girl was sent off on the bus after seeing that she hadn’t suffered any major injury. The family alleges that the girl was not even given primary treatment after the accident. The girl’s family has approached the police over the matter.