It is also mentioned in the letter that state government has already proven experience in successfully managing and operating the airports in Kochi and Kannur. 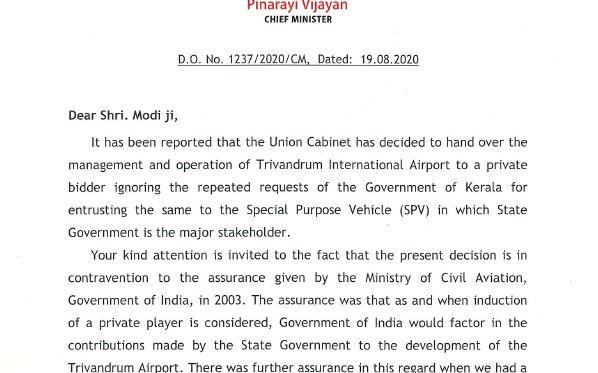 New Delhi: Kerala Chief Minister Pinarayi Vijayan forwarded a letter to Prime Minister Narendra Modi expressing difficulty to cooperate with the decision to lease out Thiruvananthapuram international airport to Adani Enterprises for 50 years. He pointed out in the letter that the union cabinet took the decision in this regard ignoring the continuous requests of the state.

The Union cabinet approved the proposal for leasing out airports at Jaipur, Guwahati and Thiruvananthapuram through public-private partnership (PPP). Adani Enterprises had won the rights to run six airports - Lucknow, Ahmedabad, Jaipur, Mangaluru, Thiruvananthapuram, and Guwahati - through the PPP model after a competitive bidding process in February 2019.

The chief minister made it clear that the state find it difficult to cooperate with the unilateral decision. He also pointed out that the decision to lease out the airport was against the assurance given by the central government and the Ministry of Civil Aviation in 2003. Earlier the prime minister had promised the same during a personal meeting with him in Delhi, the CM stated.

The state government has earlier transferred 23.57 acres of land to the Airports Authority for free for constructing the airport. This was based on a condition that the value of the land will be reflected in the share capital in an SPV to be set up. This was explained in a meeting held by the Niti Ayog in 2018.

It is also mentioned in the letter that state government has already proven experience in successfully managing and operating the airports in Kochi and Kannur. The state requested that Thiruvananthapuram airport should be excluded from the list of airports which are considered for public-private partnership (PPP model).

The decision to lease out the airport for 50 years comes at a time when a petition against it is pending in the Kerala High Court. It is difficult to cooperate with the move as the central government took a unilateral decision without considering the suggestions put forward by the state. So, the PM should intervene in the matter and reconsider the decision, the CM requested in the letter.

"The pertinent point raised by the state government is that it has proven experience in successful management and operation of airports in Kochi and Kannur, which the private bidder lacks.

"We had requested delinking the Trivandrum Intrenational Airport from the proposal to operate in PPP mode or allow the SPV of the State government to have the right to first refusal in order to match the quote of the highest bidder. None of these has been considered," Vijayan said.

Earlier in the day, the ruling Left and the opposition Congress had lashed out at the Centre over its decision to lease out three airports to the Adani group, accusing it of privatising all PSUs while the country was battling COVID-19. 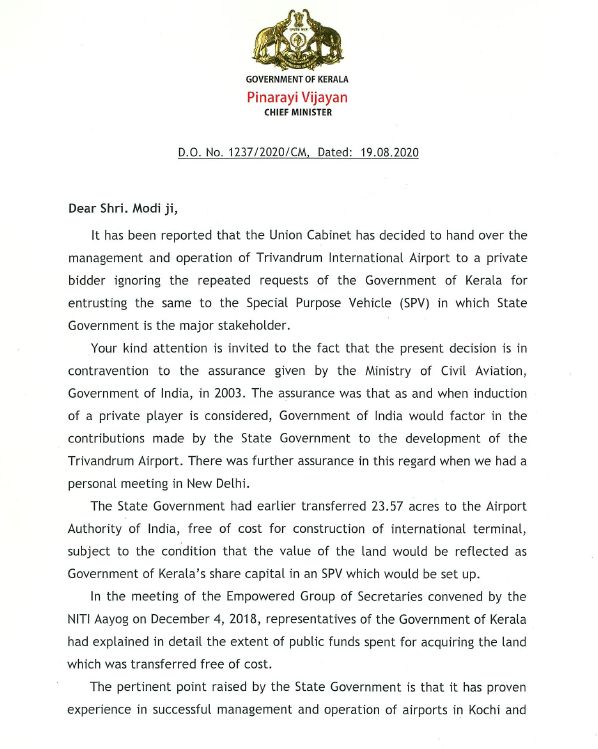