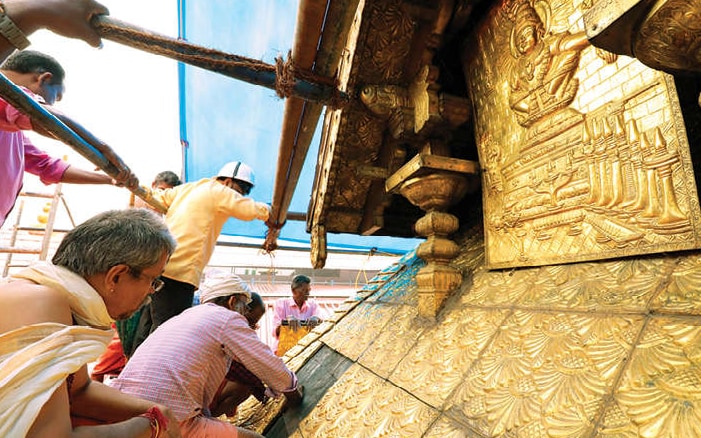 Leak on temple's roof being sealed

Sabarimala: The Devaswom board has decided to carry out complete renovation of the gold-plated roof of Sabarimala temple's Sreekovil. It is based on the observation that there is a chance for further leaks due to the age of the building’s structure. Devaswom board president K Ananthagopan said that the maintenance works will be started once the permission is granted by the High Court.

The leak found in the front side of the temple’s Sreekovil was closed temporarily last day. Four gold platings were removed and the leak was sealed using silicon glue and M-Seal. The copper plates below the golden plates have not suffered any damage. It was found during the inspection that there are no leaks within the Sreekovil and that the leak on the left side was caused by corroding copper nails. The gap between the gold plates and the oldness of the adhesives used also added to the situation.

During the maintenance work, the gaps between the gold platings will be mended using good-quality sealants and all the copper nails will be replaced. The works are expected to be completed by September 6 before the temple opens for Onam pooja.

Availability of drinking water during night a concern in Sabarimala

Action plan to repair roads to Sabarimala before pilgrimage season