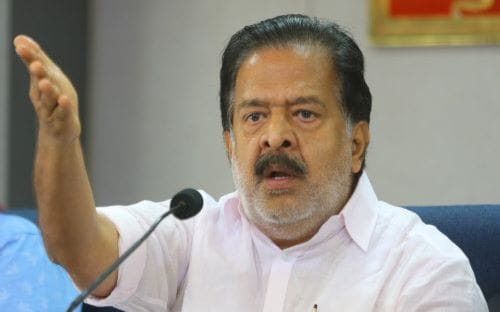 Thiruvananthapuram: Opposition leader Ramesh Chennithala said that the Kerala Police Act Amendment ordinance, envisaged by the Left government in the state to prevent cyber-attacks against women and children, blatantly violated fundamental rights guaranteed by the Constitution.

The addition of Section 118-A in the Police Act stipulates either imprisonment for up to five years or a fine of up to Rs 10,000 or both to those who produce, publish or disseminate content through any means of communication with an intention to intimidate, insult or defame any person through social media.

This is in violation of fundamental rights guaranteed by the constitution. Section 118-A is cognisable, which lets the police register a case even in the absence of a registered complaint. This can be used to silence media and individuals who express dissent and present different political views.

According to this amendment, the police can register a case if the Opposition addresses a press conference against the government. It is clear that this ordinance has been introduced with an intention to silence those who have been raising their voice against the government with the upcoming elections in mind, Chennithala alleged.

The Supreme Court had repealed section 66-A of the IT Act and Section 118 (d) of the Kerala Police Act on the grounds that these were against freedom of expression. CPI (M) was one of the first political parties to welcome this decision then. But now, Pinarayi Vijayan, who is a CPI (M) Polit Buro member, has introduced an act which is far worse, the Congress leader said.

Pinarayi Vijayan’s efforts to control free thinking media and society through threats will not work, he added.