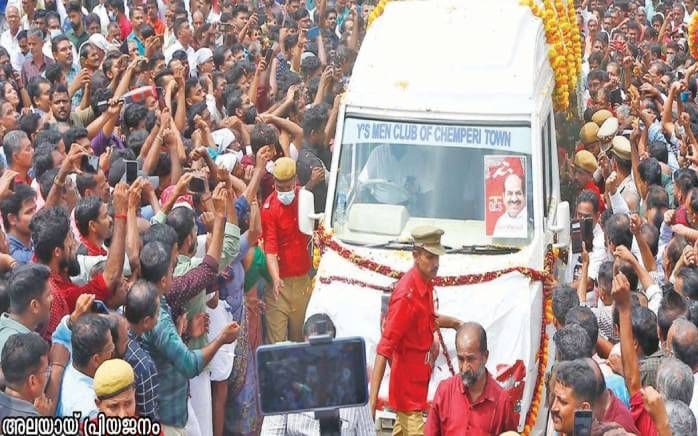 Kannur: The last rites of CPM politburo member and former party state secretary Kodiyeri Balakrishnan will be held at the Payyambalam beach in Kannur on Monday evening. The body will be laid to rest near the memorials of former Chief Minister EK Nayanar and former CPIM State Secretary Chadayan Govindan here.

The body was brought to his residence in Thalassery on Sunday night and will be taken to AKG hall in Kannur at 11 am. He will be cremated at Payyambalam beach by 3 pm.

On Sunday evening, the ambulance carrying the body of Kodiyeri Balakrishnan reached Thalassery and thousands including VIPs thronged the Town Hall to pay their last respects to the CPM leader.

Once the body was taken out of the ambulance, the state police gave a guard of honour to Balakrishnan, who was also the former state Home Minister and is known for having modernised the police force in Kerala.

His family members including wife Vinodhini and children Binoy and Bineesh were also present. (With inputs from agencies)